Rock & Roll Jeopardy! was a spin-off of Jeopardy!, this version was completely based on music and the history of it.

The gameplay was the same as the original Jeopardy!; the difference is that all the clues were Rock & Roll-related. Originally the game was played for points (just like in Super Jeopardy!, Jep! and Sports Jeopardy!), but by the third season it was played for dollars as well.

Point/dollar values were doubled, hence the round's name "Double Jeopardy!" (also known as "Double Rock & Roll Jeopardy!") meaning that they were worth anywhere from [$]200 to [$]1,000. There were two Daily Doubles hidden somewhere on the board.

As in the regular show, the game ended with a round called "Final Jeopardy!" (also known as "Final Rock & Roll Jeopardy!"). Like the regular show, any contestant who finished Double Rock & Roll Jeopardy! with zero or negative score was not allowed to play Final Rock & Roll Jeopardy! A category was revealed, and the players wagered their score during the commercial break. After the last break, the clue was revealed, and contestants had 30 seconds (and an upbeat version of the Think! Music) to write down their response, and it has to be phrased in the form of a question. A correct response added the wager but an incorrect or improperly-phrased response (even if correct) deducted the wager. The contestant with the most points at the end of Final Jeopardy! won the game and received $5,000 and the other players won consolation prizes. Starting in the third season, the winner got to keep the cash, with a house minimum of $5,000 if less was won, while the other players won consolation prizes as usual.

In original airings, four distinct cues from the Rock & Roll Jeopardy! music package were used: the main theme, a vamp used for prize cues and for the contestant introductions, a commercial bumper cue, and a rock-style remix of "Think!" used for Final Jeopardy.

After the show ended its run on VH1, several of the cues were recycled into the parent show, where they continue to be heard during certain special events. Although Chris Bell Music overhauled the Jeopardy! music package in 2008, the Rock & Roll Jeopardy! music is still used for the Teen Tournament and College Championship.

Through today, the main theme and occasionally other cues can be heard on Jeopardy! for certain special occasions:

Beginning in Season 20, the main theme was used during the College Championship, Kids Week, and Teen Tournaments. Several tournaments also used the RRJ think cue during Final Jeopardy! Initially, the main theme from RRJ played going into and out of commercial breaks. Since Season 23, it has also played at the show's open.

Based on Jeopardy! created by Merv Griffin 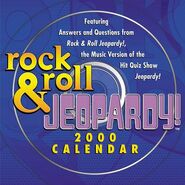 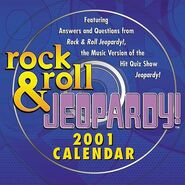