Russian Roulette was a game show with four players on a giant 6-panel roulette board, similar to a chamber of a revolver where wrong answers could eliminate a player by causing them to drop out of the game – literally.

Four players competed each show; all competing to survive and play for up to $100,000.

The four players were each given $150 at the beginning of the show. One contestant, randomly selected to start the game, was read a multiple choice question (three choices in the first round, four thereafter, all increasing in difficulty as the round progressed) by the host, and had to challenge another contestant to answer correctly. The challenged contestant had 10 seconds to answer. If the challenged player gave the correct answer, they received money and control of the next question. After every question, another "drop zone" was added, increasing the odds that the player would be eliminated after an incorrect answer; from the fifth question onward, there were always five drop zones. If the challenged player failed to answer within 10 seconds or gave a wrong answer, he/she forfeits all the money to the challenger and was forced to play Russian Roulette by pulling a handle in front of them.

The trapdoor of the player who answered incorrectly was unlocked. After the host gave the player a chance to say some last words, they would pull a handle in front of their trapdoor. This triggered the active drop zone lights (in red) to begin spinning around the field, much like a roulette wheel or (more appropriate to the metaphor) the cylinder of a revolver. The number of red lights indicated the number of active drop zones. In Season 1, it was a random spin. In Season 2, the player controlled the length of the spin by how long he or she pulled the handle.

If the drop zone light stopped on the trapdoor on which the affected player was standing, that trapdoor opened and dropped the player three feet (six feet in Season 1) into a room below the stage, with thick padding to avoid injury of contestants. This ended the round; if the player survived, the round continued. Contestants were instructed, before the show's taping started, to crouch down and roll when landing so their heads did not remain above the hole. Only one injury was reported, a sprained ankle; nevertheless contestants were required to sign lengthy waivers and release forms. Once a player dropped out of the game, the round was over and the next round would begin after a commercial break.

When time ran out in the first two rounds (indicated by a chime, usually after the fifth question), the winnings of all remaining contestants were compared. The person with the highest score was escorted to the center of the stage, and was safe from the drop. He/she would pull a handle in the center, for a random-elimination spin where a single red light revolved around the cylinder until it stopped on one of the remaining contestants, and a successful drop always happened here. This ended the round, with the winnings of the eliminated player (if any) being equally distributed among the remaining players (including the top winner) for the next round.

In the case of a tie for first place in a round-ending Russian Roulette, Mark himself would pull the lever, and all players were in danger of dropping.

In the first round, the contestants received $150 for each correct answer and $200 in the second round.

In the third round, since only two players remained, contestants had the choice to answer the question themselves or pass it to their opponent. Correct answers in this round were worth $300 in Season 1, but reduced to $250 in Season 2. As always a wrong answer forced the player to play Russian Roulette; a right answer gave him/her money and control of the next question.

Whoever had the lower amount at the end of the round when time was up was the one to drop. The last person remaining at the end of this round assimilated the other player's score (if any) into his/her winnings and advanced to the endgame. In the case of a tie at the end of the third round, the tiebreaker rules from the first two rounds were used.

The contestant was moved to the top-left zone and had 60 seconds to answer five "brain-teaser" questions referred to by the host as "5 Killer Questions." These usually consisted of jumbles, math problems and general-knowledge questions. The clock (also represented by the light border around the stage) would begin ticking while Mark asked the first question. After every ten seconds, one drop zone opened on the playfield. If time ran out or the contestant gave an incorrect answer, he/she dropped, but received $500 for every correct answer. Contestants had to begin their answers with "My answer is…" so that thinking aloud was not mistaken for an answer. If the player got all five questions correct, Mark would announce, "Stop the clock!" The contestant then received $10,000.

The end game was similar to the first version, except the contestant had to answer ten multiple-choice questions (each with three choices) in 60 seconds in order to win $10,000. The clock would not be started until the first question had been completely read. If the player failed, an additional $300 was given for every correct answer given. The phrase "My answer is…" before the answer was no longer required. As before, should all 10 questions be answered correctly, Mark would announce, "Stop the clock!"

After winning the $10,000 prize, the contestant then had the option of forfeiting the $10,000 for one final Russian Roulette, with the number of drop zones unopened being safe. Should the contestant risk his/her winnings and land on a safe zone (which would remain shut), the prize increased to $100,000. The money won through the first three rounds, however, was the winner's to keep and therefore not touched for the bonus round.

If the risk was refused, Mark would instruct the player to pull the lever to see what would have happened had the contestant taken the risk. However, the contestant would get to step off the trapdoor.

Two contestants won the grand prize in the Season 1 even though the spin was random. In Season 2, it was rigged to make the trapdoor open.

Three people won the grand prize on Russian Roulette. All of them were allowed to step off the trapdoor following the win.

Theoretically, the most money a contestant could win was over $103,850 in Season 1 or $103,600 in Season 2. (This means that every question was answered correctly and the end game was won.) 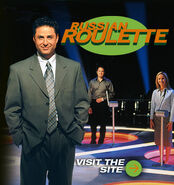 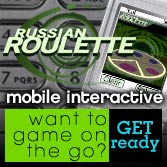 The following are a list of countries that did their versions of Russian Roulette:

There have been several times during the series where the host jumped down one of the open holes at the end of the episode, including the Playboy Playmate episode and the aforementioned April Fools' Day episode with Todd Newton guest-hosting.

The game is available as a BigJon's PC version.