PILOT SPIEL: "From In the Heat of the Night, I'm Anne-Marie Johnson. From Life on Spot, I'm Wolfgang Puck and I'm Barbara Lazeroth. From Love Connection, I'm just glad to be here. Hi, I'm Lori Fetrick the American Gladiator, you know me as Ice. From Dodgers Stadium, I'm Brett Butler ready to play the game that's the star of every party, SCATTERGORIES! And here's the guy that keeps us all in line, Dick Clark."

SERIES SPIEL: "(Insert celebrity self-introductions) here to play the game that's the star of every party, Scattergories. And here's the man that keeps us all in line, Dick Clark."

Scattegories was the party game based on the board game of the same name where the answers fit under different categories and began with certain letters.

Two teams of four, in a battle of the sexes manner (four men vs. four women) played a game based on the board game. The game was played in two rounds, each with a different category.

For the first week, the first round started with a toss-up letter given by host Clark, with the team that buzzed in first & giving an acceptable word getting a point & control of the letter. After the toss-up winners played their half of the round, the other team took a turn. After that, the team who was behind went first. Later it was changed to having the challengers going first in Round 1, and the team that was trailing still going first in Round 2.

The team in control was given a letter, and then they had 15 seconds to come up with six words/phrases/names that fit into the category that start with that letter, with each word being worth one point. When giving answers, there were two rules: no one player could give two answers in a row, and no word could be used as part of more than two answers. When the list was finished or the time was up, the opposing team could challenge any word they thought was unacceptable. When that happened, a five-member jury (consisting, on some episodes, of former contestants) would then vote yes or no, with the majority rule in place. If the majority said yes, the challenged team earned a bonus point; but if the majority said no, one point was deducted from the challenged team's score, and the word was taken off the list, plus the challengers could challenge another word if they wished.

Round 2 was played the same way except that it was played with a new category, and the point values were now doubled to two points. Plus the teams went to the celebrity board after both teams had their 15 seconds of naming items and challenging their opponents.

The team with the most points won the game. If the game ended in a tie, host Clark gave one more category and one more letter; the first team to buzz-in with an acceptable word won the game.

The winning team won $500 and the right to play the bonus round for an increasing jackpot.

In the bonus round, the winning team faced the celebrity board one last time, and was given one last category. Each star was given a different letter and gave one answer that fit into the category starting with that letter. The winning team now had 25 seconds (originally 20 seconds) to give 10 answers (two for each celebrity). When they were finished or when time ran out, the judge eliminated words that were deemed unacceptable, the celebrities with the offended words as well as celebrities that didn't have the two given words were taken out of play. Afterwards, the tapes of the celebrities still in play were played back, and each time a celebrity's answer did not match either of the team's, the team captured that celebrity and won money; and winning the bonus round won the jackpot.

For the pilot and first week, the team had to capture a jackpot celebrity. In the pilot, that celebrity was randomly selected, while the first week of the series had the celebrity be selected by the winning team in a blind draw of five cards (with the names of one of the stars on each) in advance in an attempt to win the jackpot; each celebrity was worth $200 otherwise. For the rest of the series, the winning team simply needed to capture any three celebrities to win the jackpot, with each capture worth $100.

”Some celebrity guests are offered a choice of possible responses.” 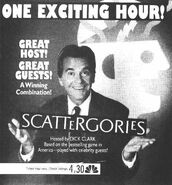 On the Set[edit | edit source]

A pilot for an unsold British version was hosted by Martin Daniels.

Based on the board game of the same name.

"Scattergories is a Reg Grundy Production." - originally said by Charlie Tuna, but later said by one of the week's celebrities

Retrieved from "https://gameshows.fandom.com/wiki/Scattergories?oldid=227800"
Community content is available under CC-BY-SA unless otherwise noted.