"Today, our couples could win an exquisite emerald and diamond bracket, a luxurious placard dining room, a shopping spree on Rodeo Drive, an exciting Hawaiian holiday, and over $14,000 in cash, here on SECOND GUESS! And here's your host, Alex Trebek!"

Second Guess (not to be confused with Second Guessers) was an unsold pilot where couples race towards luxurious prizes.

Two couples (championship red and challenger blue) faced a game board with six prizes listed in the center. The prizes were ordered based on value, with the lowest on the bottom and the highest on the top. On either side were paths leading towards those prizes. The left half was for the red team and the right half for the blue team. The steps went from one for the lowest prize, to six for the biggest prize. The higher the value, the longer the path.

To earn step towards those prizes, the contestants had to answer toss-up statistical questions. Alex read a question which always started with three possible answers and the first player on either team to buzz in could choose one of those answers. Then came the twist which gave the game its name - if his/her partner thought the buzz-in player was wrong, (s)he could make a "second guess" and choose a different answer; otherwise, (s)he could agree and stand pat. In either case, the correct answer was revealed and choosing the correct answer won control of the board, otherwise control went to the opponents.

Now here's how the steps were being taken, the team in control of the board faced a three-strip wheel randomly flashing prize names. If the buzz-in team won the toss-up they scored two spins, while winning by default only scored one spin. The prizes shuffled on all three strips and the wheels stopped when a player hit his/her buzzer. Each instance of a prize name was worth one step toward that prize. For example, if a prize appeared twice, the couple could light up two steps toward that prize. The catch is, they had to take only one prize, unless it showed up on all three wheels. When all the steps to a prize on either side were lighted, that prize was given to the couple of that color. Once the spin(s) were taken, another toss-up was played. The cycle continued until three prizes were captured, thereby ending the round.

The game was played for two rounds and the team with the most money in merchandise when they were revealed at the end of game, won the game and went on the bonus round. Both couples kept all the prizes they won, regardless of the outcome.

As in the main game, the couple stopped the randomizer to light up steps toward the cash amounts. Just like before, when a path was completed, they won the attached cash amount. There were two differences in the Bonus Round: On each spin, the maximum number of steps were lighted, and even when a cash prize had been won, it was not removed from the randomizer.

The round could end in one of three ways: 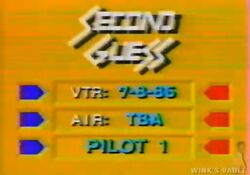 This show was one of the shows considered to replace Family Ties reruns on NBC on 1/5/1987, as per Variety, and in the end, NBC went to the Blockbusters revival with Bill Rafferty. The irony of this is that Alex's later show Classic Concentration would replace Blockbusters later that May.

Ashley, one of the contestants in the pilot was previously a contestant on Catch Phrase.