Game Shows Wiki
Register
Don't have an account?
Sign In
Advertisement
in: Battle of the Sexes, General Knowledge Quiz, Gambling,
and 15 more

Two categories were played in this round. Each category had a list of ten answers, which were all sent into the show's website. The teams would take turns making bids on how many correct answers they could name on a category. This continued until a team chose to go for the maximum of ten answers, or until a team challenged the other team to fulfill their bid. Members of the team in control of a question would take turns giving answers. Giving an answer that made it to the list would add 10 points to the bank while giving an answer that didn't would lock that team member out for the rest of the category. If the team fulfilled their bid before all three members were locked out, they won all the points from that category. But if all three members were locked out before the bid was fulfilled, the other team would get a chance to steal the points. One correct answer had to be given in order for the steal to be successful; otherwise, the points would go to the team who failed to fulfill their bid.

Each team member was equipped with a buzzer, all of which were not typical game show buzzers; the buzzers on the women's team were blow dryers and their sound was a cat screeching when a member of that team buzzed in, while the buzzers on the men's team were drills and their sound was a dog barking when a member of that team buzzed in. Hosts Roth and Cole would alternate turns asking questions, and teams would buzz in and guess if the question applied to men or women. A right answer earned the team points, while a wrong answer gave the points to the other team. Each question was worth 10 points, except for the final question, which was worth 25 points. 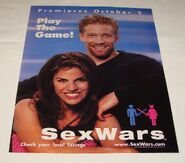 Pics of J.D. and Jennifer[] 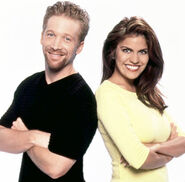 At at time, this was paired up with Street Smarts in syndication.
Scooter Pietch also did the music for WinTuition.