Shandi Ren Finnessey (born June 9, 1978 in Florissant, Missouri) is an American beauty queen, model and television hostess. She is best known for hosting alongside Chuck Woolery for the final three seasons of Lingo. Prior to this she was Miss USA 2004, and before that she was Miss Missouri 2002 & Miss Missouri USA 2004.

Shandi Finnessey graduated from Incarnate Word Academy in 1996 and completed a Bachelor of Science degree in psychology from Lindenwood University in 1999. She has credits toward a masters degree in counseling from the same university. Three years later, Shandi wrote a children's book called The Furrtails; it's a how-to book showing how kids should deal with being individual & understand others with disabilities.

In her pageant days, Shandi competed for the title of Miss Missouri USA 2000 in 1999, and again in 2001 & 2004 where she won; Shandi took first runner-up in '99 & second runner-up in 2001 (former Miss Teen USA Larissa Meek won in '01). In between in 2000, Finnessey vied for the title of Miss Oktoberfest, only to lose to future Miss Florida (USA) titleholder Jenna Edwards who would also go on to compete in Miss America 2005 & Miss USA 2007; she won nor placed in neither one. When she finally did win the title of Miss Missouri USA 2004, that became her ticket to competing in the Miss USA 2004 Pageant, which of course she won. While being Miss Missouri USA 2004, Shandi was active in charities St. Louis Cardinals Winter Warm Up for local charities and the St. Louis Special Olympics. The other major national televised titles she was competing for were Miss America 2003 & Miss Universe 2004 where she was the 1st runner-up. When her pageant competing days were over, she started hosting pageants; she co-hosted two major ones: Miss USA 2005 & Miss Universe 2006; in addition, she subsequent hosted the Miss Missouri USA pageants.

When her pageant days were done, Shandi became more active in the TV field having hosted Lingo for the last three seasons alongside Chuck Woolery. Plus she was also the weekend host for GSN's Playmania from 2007 until 2008. Shandi was also one of the contestants on the fourth season of ABC's Dancing with the Stars; she danced with Brian Fortuna only to get voted off second. Recently Shandi competed with other former beauty queens on NBC's Minute to Win It. 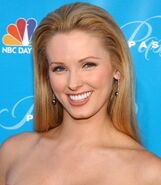