Game Shows Wiki
Register
Don't have an account?
Sign In
Advertisement
in: Childrens, Board Game Conversion, ABC shows,
and 11 more

Shenanigans was a children's board game-based game show sponsored by Milton Bradley.

The premise of the game was the same as another Heatter/Quigley game show Video Village and its child counterpart Video Village Jr.: the kids' job was to race around a giant game board. Their moves were determined by two other kids (known as "pressers") stopping the flashing lights on the letters in the word "Shenanigans" with numbers under them ranging from 1 to 4. Whatever space they landed on, they had to then follow the directions on that space (either answering a question or performing a stunt). Seeing that this show was sponsored by Milton Bradley, some of the stunts were based on popular Milton Bradley games.

During their travels on the board, they could win prizes and earn "Shenaniganzas" (the show's official currency) which could be redeemed for green stamps. They earned them by landing on the "Shenaniganzas" spaces, performing stunts, and/or answering questions. The first player to land on the finish space by virtue of an exact number (or the player furthest along the board when time was called) won the game and bonus prizes. 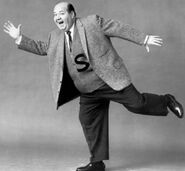 In 1964, a board game was published by Milton Bradley as a companion to the show.

Based on Video Village Jr. by Merrill Heatter and Bob Quigley