Sherri Evonne Shepherd (born April 22, 1967, in Chicago, Illinois) is an American actress, comedienne, and television host. She is one of five hosts of the popular talk show The View. She is the former host of the GSN version of the show The Newlywed Game from late 2010 until 2013 (replacing former host Carnie Wilson) although repeats have popped up from time to time.

Shepherd was born in Chicago to Lawrence A. Shepherd (born 1933) and LaVerne Shepherd (1931–1991) as the eldest of three sisters. When she was 11, her family moved to Hoffman Estates, a Chicago northwest suburb. She attended Winston Churchill Elementary School and Eisenhower Junior High School of Community Consolidated School District 54 and Hoffman Estates High School of District 211.

Shepherd worked a day job as a legal secretary while doing stand-up comedy at night. Her first TV role was on the show Cleghorne!, starring former Saturday Night Live cast member Ellen Cleghorne. Three years later, Shepherd pursued acting and stand-up comedy full-time, working again as a legal secretary for a day job. She had a guest and recurring roles on Everybody Loves Raymond and Living Single as well as regular roles on Suddenly Susan and The Jamie Foxx Show. Perhaps her most successful role prior to The View was playing the main character of Ramona Platt (2002–2006) on the comedy Less than Perfect. In 2009 she starred for one season in Lifetime Television's Sherri, a sitcom about Shepherd's life.

Shepherd has branched out to film, with roles in Guess Who, Beauty Shop, Cellular, Madagascar: Escape 2 Africa, and Academy Award-winning film Precious. Her most recent film role is as Lula in One for the Money, starring Katherine Heigl. She still performs stand-up comedy at Los Angeles area clubs like the Comedy Store and the Laugh Factory, although she lives in New Jersey. She has also been a frequent and popular guest on Ellen DeGeneres's syndicated daytime talk show, The Ellen DeGeneres Show, for which she holds a record for being on the show the greatest number of times. She also had a recurring role on 30 Rock as Angie Jordan, and she has appeared as a special guest host of Who Wants to Be a Millionaire.

Co-host on The View[]

In 2006, Sherri Shepherd became a frequent guest co-host on ABC's The View. She eventually became a permanent co-host on Monday, September 10, 2007. She co-hosted the 35th Daytime Emmy Awards on June 20, 2008. Her fellow co-host was All My Children star Cameron Mathison. Shepherd was nominated for her first Daytime Emmy Award for Outstanding Talk Show Host.

Shepherd was criticized heavily after September 18, 2007, broadcast of The View, in which she stated that she didn't "believe in evolution. Period." Co-host Whoopi Goldberg asked her, "Is the world flat?" She first responded, "I don't know," and expanded that she "never thought about it". Shepherd continued that it was more important to her that she thought about how she was "going to feed [her] child". Barbara Walters replied by pointing out, "You can do both." However, Shepherd then went on to quote scripture.[3] Shepherd later referred to her statement as a "brain fart" brought on by nerves and the following exchange between Barbara Walters and Sherri Shepherd occurred after that particularly embarrassing episode: Walters said, "Dear, the Earth is round", and Shepherd responded with: "Barbara, I know that!"

Similar criticism erupted after December 4, 2007, broadcast of The View when, during a discussion initiated by Joy Behar about Epicurus, Shepherd attempted to assert that Christians existed in classical Greece and that the Greeks threw them to the lions. When confronted on this point, she further claimed that "Jesus came first" (before Greeks and Romans) and stated, "I don't think anything predated Christians", to which Joy Behar responded: "The Jews."

Shepherd garnered ridicule after admitting to never voting partly due to her upbringing as a strict Jehovah's Witness. She was quoted as saying that she just "never knew the dates or anything"; she stated, "I've never voted for anything in my life." In January 2008, Sherri referred to R&B/gospel singer Shirley Caesar as "the black Patti LaBelle." LaBelle, like Caesar, is black.

Shepherd authored the book Permission Slips: Every Woman's Guide to Giving Herself a Break, published in October 2009.

Helping a Sista Out[]

In 2011, Shepherd offered to pay six months' rent and utilities for former American Gladiators star Debbie Clark (a.k.a. Storm) who was homeless with her son Crayton at the time.

Dancing with the Stars[]

In March 2012, Shepherd participated as a celebrity contestant on the fourteenth season of ABC's Dancing with the Stars. Her professional partner was announced as Val Chmerkovskiy, however the couple was eliminated in the fourth week of the competition.

Shepherd has admitted to having "many abortions". 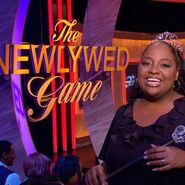