Shop 'til You Drop was an American game show that aired on a number of broadcast television networks and in syndication.

The backdrop of Shop 'til You Drop was a 14-store, two-story shopping mall.

A coin toss backstage before the show determined which couple would have the option of playing the first stunt. The host described the first of two stunts and the team who won the toss chose to play or pass to the other team. Stunts varied widely, but most involved the team answering questions based upon a pop culture category, or various other games based on pricing merchandise. During the first season of the Lifetime version, stunts similar to those on Beat the Clock were also played (such as the female partner stuffing a certain number of balloons into a pair of oversized trousers worn by her husband without breaking any). Most stunts had a 60-second time limit; however, some early stunts were played with a 30-, 45-, or (rarely) 90-second time limit.

Successfully completing the stunt earned points and allowed the team to pick a prize from one of the stores in the mall. Originally the team was limited to the seven stores on the lower floor of the mall, later on they were allowed to pick one from the top level. Although the stores and prize specialty associated with each store varied from episode to episode, each generally featured prizes typical of game shows (furniture, electronics, artwork, etc.). One of the stores also hid a mini vacation dubbed the "Shopper's Special". Sometimes a bonus prize was added to the Shopper's Special.

It's today's Shopper's Special! This is the graphic used during the later Lifetime seasons and on The Family Channel version.

And here's another Shopper's Special from 2000! This was the graphic used on the PAX Version

Two stunt rounds were played, with stunts in the first round worth 100 points, and 200 points in the second round; plus, the team who did not have the choice of playing or passing the first stunt in Round 1 had the option in Round 2.

1991 Pilot
Most of these stores were carried over into the series.

NOTE: Many of the stores were named after people who worked on the show and for Stone Stanley Entertainment; one exception, "Cosmetics Plus", was actually based on a New York-based chain.

Round 3 was the "Shopper's Challenge" round, a 90-second series of rapid-fire questions, again related to entertainment and shopping. Correct answers were worth 50 points each and an incorrect answer gave the other team a chance to respond. Only one team member could answer each question, and the partners switched places after each question.

One at a time, the team opened one of six packages on a table, each concealing a prize. The shopper decided whether to keep the gift or exchange it with another gift from one of the other stores in the mall. If they decided to exchange it, the runner scurried to one of the stores for another prize. In either case, the runner had to take the item to a prize table on the other side of the set and hit a bell before the shopper could open another box.

After all six boxes had been exchanged/kept, or if the 90-second time limit expired (the rarer of the two), the host and announcer described the prizes and added up each item's retail price, starting with those they wanted to keep. The couple kept everything they selected (including any prizes from the first two rounds and the "Shopper's Special" if won), but if they exceeded the winning threshold, the couple won a vacation.

In the pilot the couple had one minute to reach a goal of $1,000. The only difference was the price of each prize was deducted from the $1,000 goal. (The series host only said the money needed to win while the current total bill was shown.)

During the show's first two seasons, the couple needed to obtain $1,000 in prizes. In the first season with the $1,000 goal, there was always at least one prize that was worth at least $500. In the second season, there were two prizes worth at least $300. In addition, some of the packages in these seasons contained gag gifts (related to the store, with no photos of them shown during descriptions as was the case with the larger prizes), which were typically worth less than $50. The gag gifts were eliminated when the required money amount was raised to $2,500 in the third season. When this happened, there was one store in the mall that contained a prize worth at least $700.

The basic format remained the same, but four teams competed (three teams of two and one team of three), there were higher-priced prizes, and cash was used instead of points, with each event awarding a maximum of $500 in Round 1, and $1,000 in Round 2. In addition, the celebrity teams picked a prize from one of the 14 stores in both the upper and lower floors of the mall, regardless if they completed the stunt. Also, the two low-scoring teams were eliminated before the "Shopper's Challenge", in which all questions were related to entertainment and shopping, including the holiday season. Each correct answer was worth $500, and the time limit in Shopper's Challenge Round was changed to two minutes. All teams won at least $2,500 for their charities. Finally, in the bonus round, the target was raised to $5,000, and reaching or exceeding that goal won an additional $10,000. Farrah Forke & Brad Maule defeated Mother Love & The Nelsons $6,300-$2,450, and went on to win the endgame with a score of $6,192. Their grand total for the Alzheimer's Association was $26,287. All told, the four charities represented on the show earned a total of $48,554.

In the new version, two pairs competed (regardless of marital status). The show was set in a 14-department warehouse store (similar to warehouse stores like Costco, Sam's Club, or BJ's). The podiums had sponsors of products found in the store. The 14 departments were played similar to the stores from the mall version (see below), and each had a blue light.

Stunts were replaced by simple questions and pricing segments based upon specific categories, which were puns relating to their content. The first team in each round was given a choice of two categories. After choosing one, host Roberto let the contestants know what the category entailed, and then gave the play-or-pass option to the team. Whichever team played the chosen category chose one player to play the category (though conferring was allowed).

Like the stunts in the previous version, the questions dealt with pricing items or knowledge of celebrities. The team was given one minute to come up with a set number of correct answers. As in the original version, completing the category earned 100 points in Round 1, and 200 points in Round 2.

Unlike the previous version, where teams verbally chose a store in the mall, the other member of the team went into the store to grab a gift box from any department that had a flashing light, then ran back to Roberto, who opened the box and revealed their prize. As before, there was also a Shopper's Special which earned the team a bonus trip for finding it.

Round 3, the Shopper's Challenge round, remained the same as in the previous version.

The Shopper's Special graphic in the Megastore Era.

Looks like the teams are ready for the Shopper's Challenge round!
Add a photo to this gallery

Departments in bold are used.

In this version, team members alternated roles instead of one defined as the shopper and the other as the runner. One team member opened a box and the other handed the item off to their partner, who decided whether to keep or exchange the item for any prize in a department with a flashing light (with one department having a prize worth over $1,000), then brought the associated box to a table and rang a bell. That team member then came back and handed off the next item to their teammate, who repeated the process. In addition, an off-screen stagehand organized the exchanged/kept prizes. The 90-second time limit and $2,500 goal remained the same.

For the second season, the clock had a sponsor, just as the contestants' podiums did.

One episode from 2000 aired on GSN, during The 50 Greatest Game Shows of All Time series in 2006, even though GSN never owned the rights to the show. The episode that aired on GSN had the biggest record in the Shopper's Challenge Round, which was 950 Points. However, on November 15, 2013, it was announced that the network had officially acquired the 2000 PAX version of the series (Finn version only) and is currently being rerun daily at 4 & 4:30 pm Eastern starting on December 2, 2013.[1][2]

A mobile game based on the show was released by Reaxion, and plays mostly to the PAX-era "warehouse store" format of the show from 2003 to 2005. JD Roberto does make an animated appearance on this game. Reaxion closed up in 2010.[3]

Three bonus symbols on an active pay-line trigger the Shop 'til You Drop bonus. The bonus begins by showing a man and a woman along with an array of 16 boxes on shelves. The players selects boxes from shelves to reveal shopping items such as jewelry, clothes, sporting goods, etc. An award is paid for the item and then it is placed to the side in a template with four "Trip Lists". For each specific trip list that becomes filled, the game show awards a vacation trip paying an additional award. The bonus ends whenever two funny looking "honky" geese are found. (NOTE: This bonus may also trigger randomly at the end of a non-triggering play.) The theme song used in the slot machine game is the 2003-2005 Megastore version of the theme song. 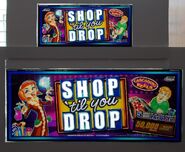 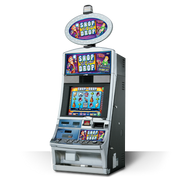 The online clothing store Empire T-Shirts released Shop 'Til You Drop T-shirts depicting the logo from the 1991 Pilot episode. They are available online and are choosable in any size and different colors. 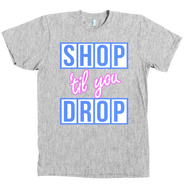 Many of the cues from College Mad House were recycled into the Lifetime and Family Channel versions.

Spend it Fast - a short lived spinoff that aired in 2002 where contestants had to purchase items in a store in less than 5 minutes.

JD Roberto guest announced on The Price is Right in 2010 shortly after Rich Fields left the show.

While Don Preiss was present in the studio for all episodes of the Roberto version, he was never shown on-camera.

Two pilots were made for a kids version: one targeted at younger kids, the other targeted at older kids. Unfortunately, neither pilot has been aired and neither version was sold.

Mark L. Walberg hosted The Big Date, Russian Roulette, and The Moment of Truth, and The Game Plane. He is currently the host of Antiques Roadshow.

Jason Grant Smith continues his career after he left the show after one season.

Dee Bradley Baker is a voice actor and is well known as Olmec on Legends of the Hidden Temple.

From 1991 to 1993, the theme song from College Mad House and many of its cues were recycled to this show. Beginning with the 1993 Holiday Special until 2002, the show's traditional theme was used with new music cues debuting in 1994 (one of them became the main theme for Quicksilver). In 2001–2002, the techno theme song was used in the closing credits. The show's final two seasons used a remix of the Shop 'til You Drop theme song with lyrics.

When PAX (then i, now Ion) reran the final Lifetime season in 1999–2000, they edited out Mark L. Walberg's segments with the couple selected from the studio audience.

In the early episodes of the Roberto version, the Gifts Department was still under the name of "Gifts Galore".

Retrieved from "https://gameshows.fandom.com/wiki/Shop_%27til_You_Drop?oldid=224804"
Community content is available under CC-BY-SA unless otherwise noted.