SERIES OPENING:
"It's curtain time… for the Showoffs! And here they are! (insert celebrity names) …and the host of Showoffs, BOBBY VAN!"

Showoffs was the Goodson-Todman game of charades which would later become Body Language (and to lesser extent the unsold G-T pilot Body Talk).

Two teams (red and blue) of three players (each consisting of two celebrities and one civilian contestant, with each member wearing a sweater of the corresponding team color) competed in a game of charades. Because the team colors were indistinguishable on black and white television sets (which were still somewhat common in 1975), the words "REDS" and "BLUES" were later placed on the front of each team member's sweater for the benefit of home viewers.

Despite its short run, Showoffs had two formats for its main game.

One team was isolated while two members of the other team acted out a series of words to their partner for 60 seconds. The actors could alternate in acting, and the guessing partner could pass on a word if he/she were stuck, but the team could only do this once per game. When time expired, the isolated team returned to the stage, and acted out the same words as the first team. The team that guessed the most words in their own minute won the round, and the first team to win two rounds won the game. If a round ended in a tie, a tiebreaker was played in which both teams had 30 seconds (timed to a tenth of a second) to act out three words, and the team who guessed the most out of the three won the round. In case of a tie, the team with the fastest time was the winner.

Towards the end of the show's run, the rules had changed from a best-of-three match to a single "race-to-the-finish" game: A team had to get at least seven correct words to win, or simply have the highest score after three rounds. The tiebreaker was also cut to two words in 30 seconds. By the final week, the best-of-three format returned, but the Payoff Round format remained (see below).

Either way, the civilian contestant on the winning team won a $1,000 prize package and the right to play a bonus round for cash. Also, if there wasn't enough time for a standard full round, an abbreviated round was played where each team had only 30 seconds to guess the words.

This also had two formats in the series.

All four celebrities alternated turns acting out a series of words for the winning contestant to guess during the next 60 seconds, with each correct answer being worth $1; the contestant, however, was still restricted to one pass.

When time ran out, one celebrity chosen by the contestant had 30 seconds to act out three more words. Only this time, the winning contestant could pass as many times as he/she wished. Each word added a zero to the end of the contestant's Part 1 winnings (guessing one word correctly was worth 10 times the money earned in Part 1, two words was worth 100 times, and all three was worth 1,000 times).

Around the point in which the main game changed, the bonus round was also revised. In this format, the winning contestant acted out a maximum of three words to one of his/her two celebrity partners. He/She acted out the first two words for 10 seconds each, with each of those words worth $1,000.

The contestant could choose to stop after each of the first two were guessed correctly, or risk his/her winnings to that point and continue. On the third and final word (usually more difficult than the first two), the player acted it out for 15 seconds, and if the celebrity partner guessed correctly, the civilian player won $3,000 more, for a total of $5,000. By the final week, every word had to be successfully conveyed within 10 seconds.

If at any point the celebrity partner failed to guess a word correctly within the time limit, the contestant lost half of his/her money earned to that point.

In any case, after each game, the contestant would switch teams and play again. Contestants stayed on the show until they were defeated or had reached the ABC winnings limit of $20,000.

The sounds used on Showoffs would later be used on Family Feud: the bell that sounded whenever a teammate guessed the word correctly became the (in)famous clang used for revealing answers. The win bells also were later heard on the show. The time's-up buzzer later signified a strike. (In the 70s and 80s, those sounds were common on ABC's game shows-- Hot Seat, Bruce Forsyth's Hot Streak, and Double Talk also used them.)

The original host was to be Larry Blyden and he taped a pilot on May 24, 1975 for Showoffs. Elaine Joyce, Ron Masak, Linda Kaye Henning, and Dick Gautier were the guests. The format used in the pilot was the same as that used in the first half of the series' run.[1]

Soon after the pilot had finished taping, Blyden went on a short vacation to Morocco. While driving to Tan-Tan, his rental car went off the road and overturned, knocking him unconscious. Doctors in an Agadir hospital were unable to contact Blyden's family for several days as Blyden had been carrying no identification.[2]

Blyden died on June 6, just twenty-four days before the series was to premiere.

ABC had almost no time to react to Blyden's death (tapings for the series were to begin soon) and substituted Bobby Van into the hosting role. This last-minute change may have deterred potential viewers, although Van had proved himself quite popular as a panelist on Goodson-Todman's Match Game. Promos that had been made prior to Blyden's death (using clips from the pilot, as was common with soon-to-debut games) had to be cut down so neither his voice or face could be seen or heard.

Showoffs debuted on June 30, 1975 at 12:00 Noon (11:00 AM Central), replacing Password and inheriting its predecessor's ratings problems. Despite facing the simultaneously over-the-top and weak Magnificent Marble Machine on NBC, Showoffs could not make any sort of dent in CBS' Young and the Restless, which that year became a top-ten show.

The game finished its six-month run on the day after Christmas and bowed out in favor of the ailing Let's Make a Deal, which left its 1:30/12:30 slot after over 12 years on two different networks. A scheduling shuffle involving Bob Eubanks' Rhyme and Reason made way for Regis Philbin's first shot as a game show host titled The Neighbors.

Showoffs was later revived on CBS from 1984 to 1986 as Body Language with Tom Kennedy as host. Johnny Olson announced from the debut through his death in October 1985, after which Gene Wood and Bob Hilton announced through the end of the run.

Listed by the Monday of each week.

Reportedly, only one episode is known to exist and is among tape traders in varied quality. Originally broadcast on November 28, guest celebrity Dr. Joyce Brothers injured herself on that episode. Her other celebrity partner, Dick Gautier, had to do her portion of the charades for the final round at the end of the show. Karen Morrow and Mike Farrell were the other two celebrities that week.

The pilot (with Larry Blyden as host) is located at the UCLA Film and Television Archive, with a clip of it shown during the VH-1 special Game Show Moments Gone Bananas. As of January 19, 2021, the full pilot can be seen on Wink Martindale's official YouTube page as part of his ongoing Wink's Vault series.

The episode broadcast on Christmas Day is also held at UCLA and was aired by Buzzr on September 25, 2021 as part of their 6th annual Lost and Found marathon. 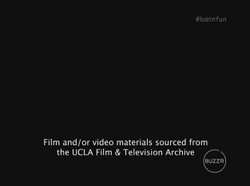 "The Showoffs" by Edd Kalehoff