After round two, the contestant with the lowest score is eliminated. If there is a tie for last place (and it happened in the pilot), one more question is asked. Whoever answers the question correctly stays in the game, but if they answer incorrectly, they are eliminated.

The contestant with the most money after this round wins the game and moves on to the bonus round for a chance to win $5,000.

In the bonus round, the winner is given clues to five words. They can make as many guesses as they want on each remark, but they have 30 seconds in total to make as many correct guesses as possible. They get $100 added to their winnings for each correct guess. The correct words are clues to a puzzle, and if the contestant correctly guesses the subject based on the clues earned, they have their total winnings increased to $5,000. If they fail, the contestant who lost in the previous round gets a shot at the puzzle for $500.

No matter what happens in this round, the winner would appear on the show again as a returning champion.

The show was originally called The Jack Cash Show.

A board game was released by University Games. 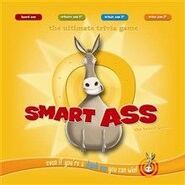