Frye was born in Glendora, California. Her father is actor Virgil Frye, and her mother is a talent agent and caterer Sondra Peluce (née Londy). She has two half-brothers, Sean Frye and Meeno Peluce, both former child actors. Frye's parents divorced when she was two.

Frye was educated at a private school in Los Feliz and attended San Fernando Valley Professional School in Burbank.

It wasn't until 1982 when she starred in her first film, a television film called Missing Children: A Mother's Story.

Two years later after two more TV films, there came a moment that really changed her life. Frye auditioned for and won the role of the title character Punky Brewster beating out over 3,000 other girls. Punky Brewster was never a rating winner in terms of grown-up viewers since it had to compete with CBS's news magazine giant 60 Minutes. But it was a big hit for little viewers 2-11 and that was enough to renew it for another season and it even spawned a Saturday Morning cartoon show entitled It's Punky Brewster. The show was canceled in 1986 after two years on NBC, but that same year, Columbia Pictures Television pick up the rights to the show and started airing it in first-run syndication for another two years.

After the show's cancellation in 1988, that same year, Soleil was asked to do another lead role in another sitcom, this time for ABC called Cadets. The show was not picked up, but its pilot did air as a special on September 25, 1988.

The next year, Soleil hosted a show based on a board game called Girl Talk. Unlike such game shows as Scrabble & Monopoly, it was not a game show; it was a variety/talk show mashup. She hosted it alongside the future Buffy the Vampire Slayer star Sarah Michelle Gellar, Russell Koplin and Rod Brogan. The series was canceled after one season.

TV show guest appearances & more movie roles followed. And then starting in 2000, Frye won the role of Roxie King in the final three seasons of Sabrina the Teenage Witch with Melissa Joan Hart in the title role. Melissa herself starred in her own series as a child called Clarissa Explains it All.

Before, during, and after Sabrina, Soleil did voices for different cartoon characters including the role of a Gorilla Tamer in an episode of Johnny Bravo and most notably, the role of Zoey in The Proud Family.

Soleil Moon Frye hosted her own how-to series on the OWN network called Home Made Simple.

Her most recent credit is that of the role that made her famous, because she starred in a reboot of Punky Brewster, which lasted only one season.

As a teen, Frye suffered from gigantomastia. She underwent a breast reduction three months before her 16th birthday.

Frye was married to television producer Jason Goldberg in a Jewish ceremony (Frye's mother is Jewish, as is Goldberg). Frye and Goldberg were married since October 25, 1998, and have three children: daughters Poet Sienna Rose (born August 2005) and Jagger Joseph Blue (born March 2008), and son Lyric Sonny Roads (born February 2014). They both filed for divorce on January 4, 2021.

Here's Soleil in her signature role of Punky Brewster. 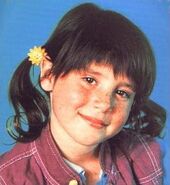 Here she is again.

Here's animated Punky Brewster again, this time with her dog.