Irwin "Sonny" Fox (June 17, 1925-January 24, 2021) was an American television host, executive and broadcasting consultant, who was the fourth full-time host of the children's television program, Wonderama. He also hosted game shows like The $64,000 Challenge and The Movie Game.

Born June 17, 1925, in Brooklyn, New York, Fox is a World War II veteran, whose first experience in children's programming came in 1954, with a St. Louis program, The Finder on KETC-TV, a children's news and travelogue program. His first national exposure came when CBS brought him aboard in 1955 to co-host the children's travelogue, Let's Take a Trip..."Taking two children on sort of an electronic field trip every week--live, remote location, no audience, no sponsors", Fox himself described that show, during interviews for PBS's The American Experience.

Fox became the first host of The $64,000 Challenge, the game show spinoff of The $64,000 Question, in 1956, but he was fired a few weeks into the series and replaced by Ralph Story, reportedly because he simply was not as funny or bright hosting the game as he was in person, according to producers. Fox himself admitted later (in the same PBS interview, as well as at a 2012 book signing in Stamford, CT), that he was so awkward he "had a predilection for asking the answers."

But Fox's blink-of-an-eye tenure on the show may have been the biggest break of his career. He escaped any taint from the coming quiz show scandal, though he told The American Experience he had been horrified by some of the testimony to Congress--including that of child star Patty Duke (who once played The $64,000 Challenge), who eventually admitted in tears that she had been coached to lie to Congressional investigators. By that time, Fox's involvement in game shows went no further than occasionally filling in for the original host of The Price is Right, Bill Cullen, or Beat the Clock host Bud Collyer.

It turned out that the job for which he was suited best came the year the quiz scandals accelerated. Independent television network Metromedia (born of the ashes of the former DuMont Network) hired Fox to host Wonderama on its New York flagship station, WABD (soon to become WNEW-TV), succeeding the team of Bill Britten and Doris Faye. Hiring Fox ended what some called the "musical-hosts syndrome" that Wonderama had for its first few years. The show had been created as well as originally hosted by actor-comedian Sandy Becker, who became a New York children's program star in his own right. Fox became Wonderama's sole host for eight years, until August 1967.

Suave, witty, and congenial, Fox juggled the slapstick and the serious, turning the marathon Wonderama (during Fox's tenure the show ran four hours Sunday mornings) into a weekly academy at which anything could happen and often did; whether Shakespearean dramatizations, guest celebrities, magic demonstrations (customarily by legendary magician James "The Amazing" Randi), art instruction, spelling bees, learning games, or other elements.

Fox was deft at turning a potential haphazard hodgepodge into a seamless whole, and he was consistent in never talking down to his young guests or viewers, treating them with legitimate respect and tolerance. The result was that Wonderama was rarely if ever known to have bored either the children who appeared on the show (the segments showing the weekly 25 or 30 children waving cross-armed, leading in and out of commercial breaks, were as much a signature as Fox himself) or those who watched it.

For a few years, it seemed FOX owned children's weekend television in the New York metropolitan area. In the same year he joined Wonderama, he reached back to the "color war" team competitions he knew as a child in summer camp to create and host Just For Fun, a two-and-a-half-hour Saturday morning show involving two teams of kids in blue and gold jumpsuits to compete in contests ranging from the mildly athletic to the wildly bizarre. One mainstay was the Treasure Chest competition where one contestant from each team would be placed in front of a locked chest and 1,000 keys. When the winner found the key to open their chest, a siren would sound, and whatever was happening at the time (be it a cartoon, commercial, skit, etc.) was interrupted. The winner would stand with arms outstretched and a towering pile of board games and toys would be placed in their arms.

A year later, Fox hosted ABC's first original Saturday morning show, On Your Mark, a game show in which children ages 9 through 13 answered questions about various professions. On Your Mark lasted one season, but the lively Just For Fun lasted until 1965. Fox left Wonderama in 1967; his successor, Bob McAllister, continued the show both locally (in New York City), and in national syndication through the 1970s. Fox gradually withdrew from television work (he'd also played Mr. Prim in the 1966 film The Christmas That Almost Wasn't), spending time in the theater and other entertainment while raising his own four children. He spent one year (1977) running children's programming for NBC (and taking one more stab at hosting, with the short-lived, California-based, Way Out Games in 1976) while spending time concurrently as a lecturer at the State University of New York at Stony Brook campus in the 1970s.

Fox also co-hosted a daily talk/variety show for adults titled The New Yorkers on WNEW, with co-hosts Penelope Wilson and Gloria Okon, plus newsman Stewart Klein. Airing weekdays during the 1967 TV season, the series was not a hit and was canceled after a few weeks.

Fox's last venture in children's TV was as the co-executive producer of the short-lived Chuck McCann's Fun Stuff. The series was seen weekday mornings locally on KHJ-TV Ch. 9 in Los Angeles from September 18, 1989, until October 13, 1989.

Fox later joined and became a chairman of the board for Population Communications International, a New York-based nonprofit concern dedicated to influencing media coverage and presentation of family planning issues—including work with the U.S. and international soap opera producers, helping them develop "more healthful" family planning storylines, as a newspaper article described it in 2002.

In September of 2012, Fox published his memoirs, entitled But You Made the Front Page! Wonderama, Wars, and a Whole Bunch of Life. 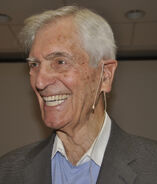