Split Second was the show where the questions had three answers, and it was up to three contestants to answer them for money and possibly even a brand-new car (an exotic vacation in the 1990 pilot).

The host would ask a series of three-part questions. Most questions had three clues to three answers (one for each answer) appear on a game board (in Hall's version it was a monitor); some questions on the ABC version would require its three answers to fit under a specific subject, and also on the ABC version, one question each show would be dubbed the "Memory Buster" in which host Kennedy gave a list of answers, but only three of them applied to the question. The first player to buzz-in got a chance to answer first, second to buzz-in can answer second, and the slowest player answered last. In Hall's version, in the event a contestant rang in too early before the clues were revealed, he/she was locked out and had to answer last.

Each time a contestant answered correctly, he/she won some money. The contestants scored according to how many of them gave a correct answer. Here's how they scored:

Also, in later episodes of the ABC version, any player who was the first to be the only person to answer correctly in the first two rounds not only won the top value, but also won a bonus prize which was his or hers to keep, win or lose. This situation was called a "Singleton".

The final round of the main game was always the Countdown Round. In this round the questions were the same as before except now when buzzing in, the contestant could give one, two or all three answers. For each time the player in control was right, he/she gave another answer; but as soon as he/she missed, the other players had a chance to answer the remainder of the question according to how fast they buzzed in. The round was called the Countdown Round because in this round the contestants no longer played for money; they tried to countdown to zero, for each correct answer counted down one towards zero. From where they had to count down all depended on their final scores at the end of Round 2. The player with the highest score had the advantage of needing the fewest number of answers, the second-place player got the middle number, and the third-place player was in the disadvantage position, needing the most number of answers.

The number of correct answers the contestants needed all depended on which version:

The first player to reach zero won the game (in the ABC version, the player with the advantage could win the game with just one question). All three players kept the cash that they won from the first two rounds but the winner of the game won the right to play for a brand new car. This made it one of the few game shows where scores were a moot point in determining the winner (i.e. the player with the most cash wasn't necessarily the winner).

The Car Bonus Round[]

The car bonus round was different depending on the series.

The day's winner faced five GM cars (usually Pontiacs, other times Chevys or Buicks). One of them was an active car (a car that would start), while the remaining four were disabled (they didn't start). All the champion had to do was to pick the car that started. Successfully doing so won that car and a cash jackpot which started at $0 plus $200 ($500 in the pilot) for every day it's not won, this was changed to $1,000 plus $500 per day. Contestants who won the bonus also retired undefeated from the show; should they make it back, they would have to choose from one car fewer. If the champion won the fifth game, the champion automatically won the cash jackpot and any car he/she wanted.

The pilot bonus was played differently: The champion could only play it once, but chose when to play and could try to start one car on the first day, two on the second and so on.

On the final episode of the ABC series, the champion failed to win a new car. However, since it was the final show, host Tom Kennedy gave him the car anyway, and the jackpot was split between the two losers of that day's game (the jackpot that day was $1,000 since the car was won on the previous day).

This version's car round had only one car each day, and it had two versions. Most cars offered here were Pontiacs and occasionally Buicks. The champion faced a row of five screens, and had to select the one(s) that had the word CAR behind it.

If the screen chosen did not say CAR, the contestant won a consolation prize and the right to play on the next show with one fewer screen to choose from for each return trip. Originally, the other screens said "Showcase", which was a merchandise prize; this was later changed to $1,000.

Three screens said CAR, while the remaining two had a different prize behind them (either a fur coat, indicated by the word FUR, or a trip, indicated by the word VACATION). The champion's job in this version was to pick the three screens that said CAR; upon revealing a smaller prize screen, host Hall gave the contestant a decision to either take that prize plus $1,000 for every day he/she appeared on the show and leave the show, or reject that prize and return on the next show. On the champion's fourth try, one extra CAR screen was added, but the same rules applied.

In either version, choosing the correct screen(s) or winning five games in a row won the car and the contestant retired from the show.

In 1990, Edwards-Billett productions attempted a pilot for a revival hosted by former Entertainment Tonight anchor (and former host of Win, Lose or Draw) Robb Weller. The rules were mostly the same. The only major change was that the players buzzed in individually for each answer rather than for position. It was otherwise played with the syndicated version payoffs ($10/$25/$50 for round one; $20/$50/$100 for round 2) and the ABC version Countdown Round start numbers (3 for first place, 4 for second and 5 for third). As with all previous versions, players kept whatever money they had accumulated during the first two rounds.

The bonus round was different from the two earlier versions: three exotic vacations were played for, with a graphic for each shown on three video screens. The winning contestant would choose the trip they wish to receive. The three graphics were then scrambled at increasing speed, then hidden behind the numbers 1, 2 and 3. The player chose which number screen to reveal, then approached a podium to select that number on a keypad which revealed that numbered screen. If it contained the chosen trip's graphic, they won the trip. Two copies of the pilot are listed among UCLA's holdings.

NOTES:
Stu Billett was a co-producer on the original ABC version.
On March 9, 2021; a full pilot was released on Wink Martindale's official YouTube channel as part of his on going web series called Wink's Vault. 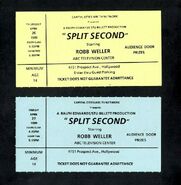 From the November 05, 1986 issue of Variety Magazine. Courtesy of Greg Brobeck.

The 1970s version is considered lost with only the pilot and a few episodes surviving.

The syndicated '80s version was rerun on The Family Channel in the 1990s, and is currently airing on GameTV in Canada since 2013. In 2019, Fremantle got the rights and will air it on Buzzr starting September 30, 2019.

The show ran in Australia from 1972 to 1973 on Nine Network, hosted by Ken James and later by Jimmy Hannan, and produced by Reg Grundy.