While categories varied slightly from season to season, the ten basic categories during the 1983–1995 version were:

All acts were judged by a panel of four judges, and each judge could award an act from one to four stars (later changed to five stars). Once both acts were complete, Ed would reveal the scores, and the best average won. If there was a tie, a studio audience vote broke the tie, in which case the results were revealed at the end of the show.

Any performer had to win at least several shows in a row, depending on the number of shows left in the season, to earn an entry into the next round of the competition; usually this was three or four wins in a row. In later seasons, three-match winners were automatically retired. In this case, two new performers would compete in that category the following week.

In early seasons, before the three match limit rule was adopted, the grand champions were determined by how long a champion held their title. While it is believed that Sam Harris holds the record for longest championship, at 14 weeks in Season 1, Harris was actually defeated by singer Beau Williams on Harris' 14th attempt. This record was actually held by Singer Durell Coleman (1985), who won the $100,000 in Season 2 with 15 wins and no defeats.

For the first few weeks of the 1992-1993 season, coinciding with the show moving from Los Angeles to the Disney-MGM Studios in Orlando, the series expanded to six days a week. Each day featured specific categories, with the weekend show serving as a recap of the week. Due to poor ratings for the weekday shows (primarily due to post-midnight time slots), this format was abandoned and the show reverted to weekend only airings.

In the wake of the success of American Idol, Arsenio Hall hosted a new version of Star Search, which ran for a year on CBS, before ending up in reruns on cable channel GSN for one year from 2004 to 2005. This new version was judged by four panelists, including Ben Stein, Naomi Judd, Ahmet Zappa and a rotating celebrity panelist (which in at least one case was McMahon himself). Among the winners were singer Tiffany Evans, comedian John Roy and singer Mark Mejia.

The revival consisted of four series. For the first series, the categories were Adult and Junior Singer, Comedy, and Modeling. In Series 2 and 3, Modeling was replaced with Dance. In the final series, the Comedy category was scrapped altogether and only the singing and dancing categories remained.

For the first three series, two new competitors faced off. The three house judges, along with the one celebrity judge, gave each contestant a score on a scale from one to five stars, making a maximum studio score 20 stars. During each commercial break, the home audience went to www.cbs.com/star to rate the competitors who just performed. Each performer could earn up to another 20 stars from the home audience. In the climactic moment before the score from the home audience was revealed, Hall would often say, "Hit me with the digits!"

When the scores were tallied, the higher scoring performer won. If the score was tied, then Hall would read off each performer's score rounded to the nearest hundredth (the at-home score was initially rounded down to the nearest star, unless there was a tie). That performer would then go on to the next round of competition. The only real exception to this format during the first three series was that three people competed in the semi-final rounds, not two. After the first two series, a special, "Battle of the Best" show took place, where the two Adult Singer, Junior Singer, and Comedian Grand Champions (Modeling was only the first season, and Dance had only been around for one season) were brought back to face off for an additional $100,000.

For the final series, three contestants in Adult Singer, Junior Singer, and Dance were brought back to initially compete (Comedy was dropped, jokingly because Naomi gave many comics only one star). The three brought back in each category were not necessarily the Grand Champions of their series. The show scrapped the celebrity judge and had three house judges for the entire series: Naomi Judd, MC Lyte, and Matti Leshem (who tried to berate contestants as Simon Cowell was doing at the time on American Idol).

As in past series, two new contestants competed. With only three judges, a score of 15 stars was possible, and ties were broken by a majority vote between the three. This is where the former contestants came in. Initially, in each category, these three performers made up the "Winner's Circle". The winning challenger then had the chance to challenge one of the three performers in his or her respective winner's circle. The winner's circle performer then had to beat or tie the bar set by the challenger; ties were automatically given to the Winner's Circle performer. If they couldn't beat the score, they were out of the competition, and the challenger took his or her place in the Winner's Circle.

This remake lasted two seasons before its cancellation in April 2004.

At the same time, a spin-off called Star Search – Das Duell der Stars von Morgen (Star Search - The Duel of the Stars of Tomorrow) hosted by Kai Pflaume was produced and aired in Germany, but with less success than the more popular show Deutschland sucht den Superstar (Germany is Looking for the Superstar), the German version of the Idol series.

In the 2000 documentary film Just Melvin, Just Evil about James Ronald Whitney's grandfather named Melvin Just, clips of James' appearance on Star Search from 1986 and 1987 can be seen. 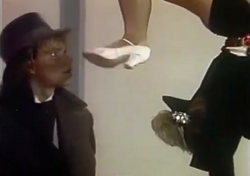 ADDITIONAL NOTE: a clip of him appearing on Body Language could be seen as well. 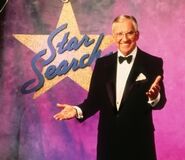 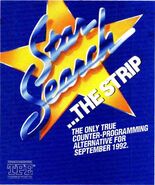 Theme composed by Joey Carbone; Carol Connors added lyrics to the theme in 1992 to use as the show's closing theme for its final 3 seasons.