OPENING SPIEL (1970s):
PETER: "Stay tuned for a special half-hour of fun as we turn The Hollywood Squares into… you guessed it, The Storybook Squares! Okay fellas, hit it!" (horns) KENNY: "Hear ye, hear ye, hear ye! By special proclamation for today, two families will compete for valuable treasures on THE STORYBOOK SQUARES! And here to introduce our nine stars from Storybook Land, is the master of Storybook Squares, SIR PETER OF MARSHALL!"

Storybook Squares was a short-lived children's spinoff version of The Hollywood Squares with the nine celebrities dressed as famous historical and storybook figures. Sometimes, a celebrity would be dressed as a character they're known for playing on TV, such as Carolyn Jones as Morticia Addams (from The Addams Family), Arte Johnson as the German soldier from Laugh-In, or William Shatner as James Kirk (from Star Trek).

The set of the 1969 spinoff had a cartoon-esque set, whereas the set used for the special 1970s weeks was heavily decorated to resemble a Medieval theme.

Both versions were played similarly to the regular Squares: get three squares in a row either across, up and down, or diagonally (or be the first contestants to capture five squares).

Each player in turn picked a celebrity and then host Marshall asked a question to that star. The star would then usually give a Zinger (a crazy untrue answer) and then his/her real answer. After hearing the real answer, the contestant in control decided to either agree (meaning they believed the star was correct), or disagree (meaning the star was incorrect or simply bluffing). A correct judgment won the square, but a wrong judgment gave his/her opponent the square. If the contestant was going for a block and missed the question, the opponent did not get the square because a win had to be earned by the contestant in control.

The Secret Square was played the same as before.

The first game was played by the kids, the second by the parents, and the third by the grandparents or the whole family (whichever came first). Each completed game was worth $300, and if time ran out in the middle of a game, each square captured during that game was worth $50. The family with the most money at the end of the show won a grand prize.

If the match ended in a tie, one final question was played with the star of one team's choosing; if the team could agree/disagree correctly, they won the match. Otherwise, the match went to the opposing team. 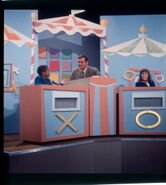 Professional photo of the set

Frankenstein drops for a visit!

A new version was originally going to be planned on CBS' 1998–1999 Saturday-morning schedule replacing Wheel 2000 (a.k.a Wheel of Fortune 2000), but it was bumped off in favor of Blaster's Universe.