Strike it Rich was a show where people in need of money (e.g. medical problems) answered questions to win it.

People in need of money came on and told their "sad story" (tale of woe), then tried to win money by answering four relatively easy questions. Each player would start with $30 and may bet any of the current bankroll on each question after being told the category. If the contestant didn't win any money, the emcee opened the "Heart Line", which was a phone line to viewers who wished to donate to the contestant's family.

While a simple format, the show was controversial during the 11 years it aired. While some applauded Strike It Rich for helping out some less-fortunate people (as well as showcasing the sincere charity and good-will of viewers who donated through the Heart Line), others found it a sickening spectacle that exploited the less-fortunate contestants for the vicarious thrills of the viewers and the selfish gain of the sponsors.

Part of the criticism was it promised more than it could deliver. Though the show received between 3,000 and 5,000 letters per week from needy people wishing to win what would be (to them) life-changing sums of money, only a small fraction of those could be selected; although this was partly due to the limits of television production (that the series, although ambitious in its goals, could not reasonably assist every person needing help at the same time), critics stated that the show picked mostly those thought to have the most interesting tales of woe.

Despite warning by the show's producers, a number of people hoping to be contestants exhausted their money to travel to New York, only to be rejected and end up relying on charities such as the Salvation Army to help them return home. This led to complaints from charities and local government agencies similar to those that were leveled formerly at Major Bowes' Original Amateur Hour:

CBS and NBC remained unconcerned over the controversy, going on record as stating "We don't want to do anything that would antagonize the sponsor." Statements such as this allowed companies such as Geritol and Revlon to literally control every last aspect of what happened during the shows they sponsored; the most notable "controlled" shows were Twenty One, The $64,000 Question, and Dotto - all of which were destroyed by the quiz show scandals.

Strike It Rich ended on January 3, 1958, long before the scandals became known to the general public, and as such never came under that sort of official scrutiny.

A home game was released by Lowell in 1956 with Warren Hull on the cover. 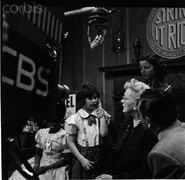 The series was destroyed, partly due to network standards of the era and partly due to its controversial nature. Four episodes are held at the UCLA Film and Television Archive, and a few are held by the Paley Center for Media. The J. Fred & Leslie W. MacDonald Collection of the Library of Congress has one kinescoped program from November 28, 1956.