An episode of Laverne & Shirley from 1979 was named "Supermarket Sweep". The title characters were Slotnik's one millionth customers. The man behind the counter said that they won a free shopping spree in the supermarket. They had 3 minutes to grab everything they could get their hands on and whatever stuff they had must be over the line to be won. The hilarious duo shop like crazy. As soon as they have a heap of stuff, they get tired and all they win are two items.

A Nickelodeon kids' game in the 1990s better known as Nickelodeon Super Toy Run, hosted by Mike O'Malley had kids given 5 minutes to grab everything, which would be toys, before time was up. This was a similar concept to Sweep but it was toy shopping at Toys R Us.

On the Married...with Children two-parter "You Better Shop Around" from 1991, Al & Peggy Bundy compete against a rival in a shopping spree in the supermarket in which the Bundys are seeking refuge due to a broken air conditioner. 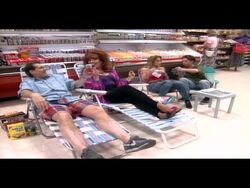 Married With Children S05E21 You Better Shop Around (1) 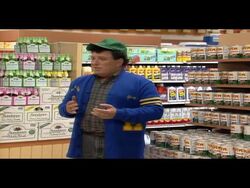 On Late Night with David Letterman in 1992, Dave makes an appearance on Supermarket Sweep as one of his clips of the week. Dave coaches the shoppers while wearing an Ithaca sweatshirt and a whistle around his neck.

In the Batman Beyond episode "Spellbound" from 1999, when Terry Mcginnis is ensorcelled and ransacking Wayne Manor, he hallucinates being on a game show called Supermarket Spree. 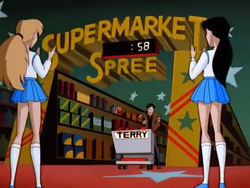 In 2002, after Elmo watches a video about sleep on the popular Sesame Street ending segment, Elmo's World, there is a parody mentioned called "Supermarket Sleep". 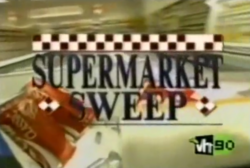 The Red Tag Special prop was used in the set of GSN's The 50 Greatest Game Shows of All Time in 2006.

Family Guy has referenced Supermarket Sweep twice, the first one was in 2006 for the episode "You May Kiss The...Uh...Guy Who Receives" where Peter talks to Brian's gay cousin Jasper "Hey, Jasper, let me ask you something. When you're in the shower at the "Y", is that like "Supermarket Sweep" for you guys, or is there some kind of etiquette?". In the 2017 episode "Cop and a Half-Wit" (the title itself is a parody of the 1993 film Cop and a Half) Peter runs through Joe's house a whole minute and grabs a majority of his stuff.

PG: I want a minute in your house with this shopping cart like "Supermarket Sweep". Here, time me.
JS: Peter, you expect me to let you ransack my house?

In 2016, as part of the "Cut For Time" unaired skit, Saturday Night Live (SNL) spoofed "Supermarket Sweep" as "Supermarket Spree", where Padget (Melissa McCarthy) will stop at nothing to take out her competitor Melanie (Vanessa Bayer).

In 2018, a Dallas Cowboys video featuring Ezekiel Elliott, Dak Prescott and Jaylon Smith competed for a grand prize with 2 minutes on the clock in Supermarket Sweep presented by Albertsons & Tom Thumb.

Retrieved from "https://gameshows.fandom.com/wiki/Supermarket_Sweep/Sweep_In_Popular_Culture?oldid=198157"
Community content is available under CC-BY-SA unless otherwise noted.