Sweethearts was a short-lived game show based on the even shorter-lived British show of the same name where three possible couples faced a panel of three stars.

A sort of combination of The Dating Game, The Newlywed Game, and To Tell the Truth. Three couples (each with a different story on how they met) faced a panel of three celebrities, two of them were false, the other was telling the truth. Each couple came out one at a time, then each panelist asked the couple in control questions for an unmentioned amount of time. Time ran out by the sound of a doorbell.

When all the couples were grilled, the panel voted on which couple's story was true. Host Reilly would ask the couple with the real story to reveal themselves by saying, "Will the real couple give each other a big hug and a kiss?". Each incorrect vote was worth $500 to the couples, though unlike To Tell the Truth the teams didn't share the prize money; the impostor couples scored for each vote they received by the celebrities, while the real couple only won money for each celebrity who didn't vote for them. If the couples fooled the panel completely, the real couple won a big trip plus $1,500 total. 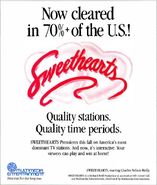 The original British version produced by Anglia Television and was hosted by Larry Grayson with John Benson as the announcer aired on ITV from 31 March (March 31) until 23 June (June 23) 1987.

The series is intact, but has not been rerun.

Stations that aired this inculded:

Based on the British series of the same name.