"Take one square, it may be a trip to Spain. Take two squares, you could also win a piano. Take three, four, five squares and you can drive away in this magnificent Corvette Stingray. But first… you must… TAKE 5! And now, here's the host of Take 5, Tony Hernandez!"

Take 5 was an unsold game show pilot where two contestants competed to capture squares on a gameboard by answering questions while winning prizes.

Two contestants competed to capture squares on a game board by answering questions and win prizes.

To start, a toss-up question was asked and the first player to buzz-in and answer the question correctly played the game first.

The contestants both faced a game board of 10 answers, but five them were the correct answers to a question. The player in control selected one of those answers he/she thought was one of the right ones. Any answer chosen was considered correct unless the opposing player buzzed-in to challenge the answer.

The player that won an answer got control of a 9-square game board. Behind the squares were prizes. On a player's turn at the board, he/she put light up links (lines) on the board. A challenge win earned two links, a no challenge earned one link. The controlling player lit up the links by pressing the corresponding button on their console resembling the prize board. When a link was lit, the square(s) touching the link revealed the prize(s) behind them. Once the link(s) was/were lit, play went back to the answer board with the link lighter still in control. To win the prize and capture the square, the person had to be the one lighting up the last link for that square (the square capturer's name replaced the prize won).

Once all five answers on the board were chosen, a new round was played with a new question.

The first player to capture five squares won the game, kept the prizes and went on to play for a new car.

The winning player was faced with ten new answers to a brand new question. Again, five were right and five were wrong. The winning player had 60 seconds to spot the five correct answers and win the car. The way this works was that the ten answers were placed on one board and the champion told host Tony to move the five answers of his/her choosing to another board. Once the five choices were made, announcer Don told the contestant how many he/she had right and every time the champion had less than five right, he/she told Tony which answer(s) to put back and what answer(s) to replace it/them with. The process continued until the champion got all five right or until time was up. 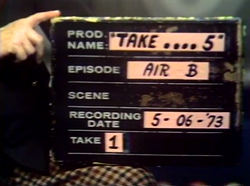 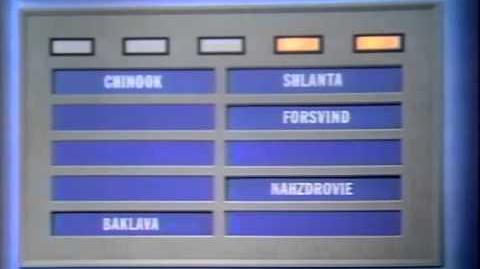 Take 5 Game Show Pilot
Add a photo to this gallery
Retrieved from "https://gameshows.fandom.com/wiki/Take_5?oldid=225874"
Community content is available under CC-BY-SA unless otherwise noted.