SEASON 1 INTRO:
"Take a Look, Take a Good Look, starring Ernie Kovacs! Brought to you by Dutch Masters cigars, skillfully blended to give you cool, clear, mild taste. Next time step up to finer smoking pleasure with Dutch Masters, the fine cigar. And here he is, Ernie Kovacs!"

SEASON 2 INTRO:
"Ernie Kovacs, Take a Good Look! Starring that man of many faces with the most baffling clues to ever mystify a panel. Brought to you by Dutch Masters cigars made from tobaccos married for mildness to add new smoothness to your smoking. Step up to finer smoking pleasure with Dutch Masters, the fine cigar. Now here he is, Ernie Kovacs!

Take a Good Look was a primetime panel game hosted by innovative comedian Ernie Kovacs where celebrities tried to guess the identities of guests who were usually associated with a newsworthy event.

Three celebrities tried to identify guests associated with newsworthy events from displayed props, short film clips, and asking questions. Shortly into the run, the props and film clips were replaced by pretaped skits which starred Kovacs as his various characters, with the clues hidden in them.

Two games were played per show, with each game having up to three rounds of clues and questions. Guests received $50 for each round they stumped the panel, and stumping the panel after the third round awarded a total of $300. 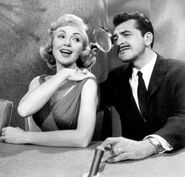