Game Shows Wiki
Register
Don't have an account?
Sign In
Advertisement
in: Word Games, Puzzle, Board Game Conversion,
and 12 more

(Celebrity) Talk About was a short-lived game show produced in Canada that was loosely based on the American board game Outburst.

Two teams of two contestants competed to "talk about" a series of subjects which can be either people, places, and things; all while trying to reveal ten hidden clue words on a game board.

Each round of play was conducted in the same manner. The game started with the champions playing first and each subsequent round saw the teams taking turns. One team was isolated (by standing behind a podium to the side of the play area and they would place headphones on their ears and keep their backs turned to their opponents so they could neither see nor hear anything) while the other team was given a choice of two subjects to "talk about" and the team captain would then choose the subject and who would speak first.

Once a subject was chosen and the decision who would play first was made, each player on the talking team had 20 seconds to talk about that subject as much as possible. While talking, they faced a game board of ten hidden clue words associated with the subject chosen by the producers; and the team tried to come up with as many as possible. Each time the team said a clue word, it would be revealed on the board and one point was added to the pot. Credit was given for forms of a word, but not synonyms; in addition, these words would be taken off the list the other team would be shown. If between them, they uncovered all ten clue words, not only did they get the 10 points, but they also won a $500 bonus (all monies were Canadian currency). If they didn't get all ten after both players took their turns, then the opposing team was released from isolation, got to see the words that were missed, and try to guess what the subject was. If the isolated team could guess the subject using the words they saw, they stole the points; but if they couldn't, the talking team would keep the points.

The first team to reach 15 points or more won the game, $100 and advanced to the bonus game, while the losing team received parting gifts. All players received a copy of the Talk About home game.

Games could straddle from the end of one episode to the start of the next. This rule was changed for celebrity episodes; when time ran out at the end of an episode, the team in the lead won the game and received $1,000 in prizes for the charity sponsoring them.

In the bonus game to start, the winning team had a choice between two bonus prizes to play for. Then just like in the main game, they had a choice of two subjects. First they chose one of those subjects, then they decided amongst themselves as to who would talk, and who would go into an isolation booth. While one player was in the booth, the other had 20 seconds to talk about the chosen subject to reveal as many of the 10 words as possible with each word uncovered worth $100. If the talking player could reveal all ten, the team won $2,000; if he/she did not, however, he/she could decide to either take the money won or allow his/her partner to talk about the same subject in an attempt to get one of the remaining words on the list in as many seconds as revealed words in a double or nothing format. When taking the gamble, the partner was removed from isolation and had as many seconds as revealed words to try and say one of the words unsaid by the first player. Doing so doubled the money, but not doing so won nothing. In addition to the cash, winning the bonus round in any way also won the selected bonus prize.

In Celebrity Talk About, the bonus game was only played for money.

Teams stayed on the show until they were defeated or won five games in a row. The fifth game if and when they made it was the grand game in which if won, they won a jackpot prize package, which stated at $1,000, and a prize was added every time new champions were crowned until a team claimed it. The biggest Grand Game Jackpot won on the show was $10,000.

Before its nationally Syndicated run in America, the show was first seen in Canada on CBC on October 17, 1988.

A primetime celebrity version with CBC stars was added on January 10, 1989.

The show also aired simultaneously in Canada on CBC, with repeats airing on GameTV (Canada's GSN) from January 3, 2011 until September 2015. The show returned to GameTV's schedule on July 1, 2019.

After being off the air on American television for no longer than 29 years. On May 9, 2022 it was officially announced on Buzzr's official Twitter page that show will have a marathon on May 29 then the series would be added to its lineup on May 30.[1] 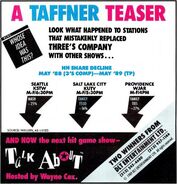 A home version of the game was produced by Pressman in 1989. All contestants got a copy and Wayne would plug it after every match. Partway through Season 2, Dean Hill began plugging it after coming back from the first commercial break. 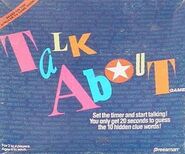 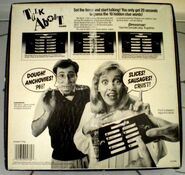 A computer game was produced by GameTek in 1990, but is fairly rare.

The following are a list of countries that have previously aired their versions of Talk About including: