On TattleTales, celebrity couples talked about their lives together, as well as some of their hobbies, their lifestyles, and maybe would even reveal some dirty little secrets. While they were doing this, they played for money for their respective rooting sections: red, yellow (banana), and blue. The show itself was a reboot of a short-lived Goodson-Todman game show called He Said She Said as of which itself was a retooling of an unsold 1966 pilot called It Had to Be You and later in 2021 as About Last Night.

The game was played in two halves: in each half, one half of the couples (all of the same sex) wore headphones, sat in an enclosed room on the left side of the set, and were being viewed by television monitors; the other half sat behind the playing desk in front of the audience. The show went through two formats.

Bert read a question to the spouses sitting at the desk. A spouse would then buzz-in to answer that question and give a clue (up to two words in length) to the answer that he/she thought his/her mate would recognize. The isolated mates' monitors would then be turned on and Bert would then repeat the question followed by the clue. If a mate thought his/her spouse gave that clue, he/she would then buzz-in (using a buzzer of his/her own) give his/her answer. If his/her answer matched the original answer given by his/her spouse, the couple won money for their rooting section according to how long the clue was ($100 for a one-word clue, $50 for a two-word clue). Two questions of this type were asked, although, sometimes, the second question would be the same as the first (in which case, the remaining couples would play).

After the two questions, Bert read a mini-multiple choice question called a "Tattletale Quickie", in which each spouse in turn would answer the question. After each spouse gave an answer, the isolated mate gave his/her own answer, and if they matched, they won $100 for their rooting section.

In June 1974, the format was changed to have all "Tattletale Quickies" throughout the entire show. Because of this new format, they didn't need to call them "Tattletale Quickies" anymore. In addition, the scoring format changed: each question had a pot of $150. If more than one couple matched, they divided the pot evenly ($50 for all three, $75 for two); if, however, only one couple matched, that couple won the whole pot. If no couple made a match, the money was carried over to the next question. Four questions (sometimes more in case of extra time) were asked (with the roles reversed after the first two) and the final question was worth double.

The three "Rooting sections" (one-third of the studio audience, divided into the colors of red,yellow (sometimes nicknamed "banana"), and blue) divided the money their respective couples win for them. The couple with the most money at the end of the show won an additional $1,000 for their rooting section. If the game ended in a tie, the bonus was split between the tied couples ($500 for two, $334 for all three).

Cash prizes on game shows are typically awarded to contestants in the form of a check, mailed weeks after a show has been taped. Because of the impracticality (e.g., postal costs) of doing this for an entire studio audience (there were 100 people per section), Tattletales kept a check-cutting machine in the studio and distributed the money to the audience members on their way out immediately after the show.

An Australian version aired on the Seven Network as Celebrity TattleTales, hosted by Ugly Dave Gray for a brief time from 1979 to 1980, and was produced by Reg Grundy. The show was cancelled after being on the air for only three months.

A Brazilian version ran on SBT from 1975 to 1986 under the name Ela Disse, Ele Disse ("She said, He said") hosted by Silvio Santos.

Mark Goodson & Bill Todman - based off of a previous show called He Said She Said.

TattleTales’ closing logo and copyright notice from the 1984 series finale 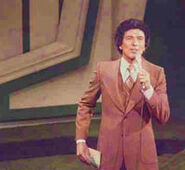 A board game adaptation was planned by Hasbro for release in 1978, but was scrapped (presumably because the show ended that year).

A DVD game version of TattleTales was considered by Imagination Entertainment in the mid to late 2000s but it never got made or released.

A DVD set titled The Best of TattleTales was planned by BCI in 2009 but it never got released. 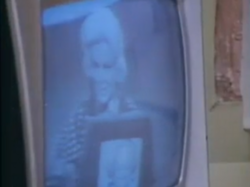 In 1976, the show was once satirized in a first season episode of the Canadian sketch-comedy show called SCTV as Celebrity Tattletales. The spoof featured Bert Convy (played by Eugene Levy) asking questions to Prince Phillip (played by Joe Flaherty) and Queen Elizabeth (played by Catherine O'Hara) about their personal lives. 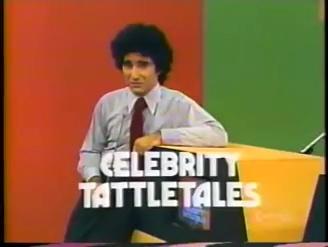