In each round, one member from each couple played the entire round. Their partners could cheer them on but they couldn't help out in any way.

The two active players saw a series of blank squares representing the number of letters in a mystery word/phrase/name. When Jim said "Go", letters in the puzzle appeared one at a time (the same as Scrabble's Speedword and Wheel of Fortune's Toss-Up Puzzles), and as soon as a player knew the solution, he/she had to then buzz in. Giving the right answer won money, but giving a wrong answer or running out of time gave the opposing player a chance to see the remaining letters minus the last, then had two seconds to buzz in and answer.

Each toss-up puzzle was a clue to a bigger puzzle. The player with a correct guess would come up to a giant computer housing the puzzle and picked two letters from the keyboard in front of him/her. The keyboard in question consisted of the entire alphabet and a star key (the star key represented punctuation marks and/or numbers in the puzzle). The contestant could only choose from the letters that were lit, for they were the only ones that were in the puzzle, except for just the one which did not belong, and that letter was dubbed "The Stinger". The Stinger was always shown at the start to the home viewers so that they could keep their eyes on it, but not to the contestants; any letter could be the Stinger (though letters Q, X and Z were never Stingers) but the star key was the only one that was never the Stinger. When choosing the letter, each time a letter/number/symbol appeared in the puzzle, money (which was always the value of the toss-ups) was added to the puzzle bank; if the letter chosen was the Stinger, the contestant lost a chance at solving the puzzle. If the two letters chosen were safe, the contestant had a chance to solve the puzzle and if he/she solved it, he/she won all the money in the bank for the team; otherwise, another toss-up was played.

Here's how they scored in each round:

In the event there was time remaining after three puzzles, a fourth puzzle was played with the same amount from the third puzzle. When time ran out in the middle of a puzzle, letters in the puzzle were revealed one at a time (just like the toss-up clues) until one player answered correctly, and the bank continued to accumulate as the letters appeared.

The couple with the most money at the end of the game were the winners. If the game ended in a tie, a tiebreaker toss-up was played with the first player to buzz in with a correct answer winning the game; if a contestant buzzed in and was wrong, the game went to the opposing team.

The winning couple got to keep all the cash earned and went on to play the bonus round.

Two contestants playing the "Toss-Up" clue for the right to add two letters to the puzzle & solving it.

The letters in the puzzle are selected…

…and the Stinger is revealed. The audience booed it in the second season.

Contestant Steve Rutenbar tries to solve the puzzle based on the two clues given.

This lady is trying to build up the value of the bank to solve this puzzle. Notice the change in graphics between Season 1 and Season 2.

This is what happens when the Stinger appears in Season 2.
NOTE: In the first season, the Stinger was just signified by sound.
Add a photo to this gallery

To start, the winning couple was shown three categories, and they had to choose the one they knew about the best. After choosing a category, the winning couple entered into an isolation booth where they could hear only host Jim and not the audience, and could only see the game board screen. Once they entered, they had 60 seconds to solve six puzzles under the chosen category. Each puzzle worked the same as the clue puzzles in the main game except that the couple could now guess as many times as they wanted at any time. As soon as they yelled out the right answer, the puzzle was filled in and they moved on to the next puzzle. If they could solve all six before time expired, they won a cash bonus depending on their appearance.

The first win was worth $5,000, and the second win was worth $10,000. On the first two bonus games they could either take the appropriate bonus cash prize and leave the show or come back the next day to face a new couple. In any bonus round, if they failed to get all six right when time ran out, their reign as champions ended but they did keep all the main game cash. However, if the winning couple won three bonus games, they won $1,000,000. In the first season the million dollar prize was all cash and delivered in an annuity fashion ($40,000 a year for 25 years). In the second season 9/10 of it was cash or $900,000 ($36,000 a year for 25 years) while the remaining $100,000 was in prizes including two new Mazdas (but alternating between two pairs: the RX-7 and 323, or the 626 and Cab Plus pickup truck), 20 round-trip tickets to anywhere in the USA (on Delta Air Lines); five complete rooms of furniture (a kitchen, living room, dining room, den, and bedroom); and an outdoor spa.

Nine couples became millionaires over the course of the series, and despite the cancellation & various buyouts and acquisitions in terms of the production company (Warner Bros. now owns the Lorimar-Telepictures catalogue), all payments were honored until 2011/2012.

A couple playing on their first bonus round from Season 2. Unlike Season 1, the home audience now can see previous answers. Plus, the clock now counted down in tenths of seconds.
Add a photo to this gallery

This couple made it to $1,000,000 with two seconds to spare!
NOTE: This is the pilot bonus. It is played the same way except that winning couples needed to solve five puzzles instead of six in one minute.

Also, in the pilot, they had a marching band as opposed to the studio audience and family members.
Add a photo to this gallery

A board game based on the show was released by Cardinal in 1986, complete with contestant application. Early editions of the game came with a "letter console" with vacuformed plastic keys for the keyboard section, similar to what was used on the show. As a cost cutting measure, however, later editions replaced these with cardboard tabs. No other changes were made to the game or its packaging for the later versions to denote this change (the back of the box in both cases show the plastic keyed version of the game), making the earlier version the preferred version among collectors. (NOTE: Host Jim Lange is on the cover of the box along with the artwork of the set) 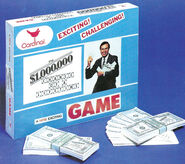 The logo was the same in both seasons, but the backdrops were different.

This show started out as a failed 1970s pilot called The Letter Machine.

This was the first nationally-aired game show in the U.S. to offer $1,000,000 as its top prize, 13 years before Who Wants to Be a Millionaire? and the various rip-offs that premiered afterwards. (Prior to this, only state lottery shows had seven figures for a prize. The Joker's Wild's $1,000,000 Tournament does not count, as it only represents the total purse.)

This was one of the few game shows to use touch-sensitive devices for the buzzers instead of a red button or a handheld device. Its foreign counterparts also used the same feature for the buzzers.

In the first season, when the million was won, gold Mylar confetti was released from the ceiling, much like other shows that have a seven-figure prize tend to do today, but sometimes, the giant "$1,000,000" sign would also shoot fireworks. In the second season, balloons would be released over the two Mazdas along with the confetti. Also, when the million was won, clanging bells and sirens would go off as well, which would later be used on Fun House (when the Power Prize was found), College Mad House (when all 13 tags were grabbed and the trip was won), and most notably, Supermarket Sweep (Ruprecht) when the $5,000 was won, or in later seasons, when the Manager's Special was announced.

Throughout the series, the $1,000,000, displayed on a pedestal at center stage, would always be guarded by two Wells Fargo security guards.

Retrieved from "https://gameshows.fandom.com/wiki/The_$1,000,000_Chance_of_a_Lifetime?oldid=231722"
Community content is available under CC-BY-SA unless otherwise noted.