"From (the Chuck Barris Stages in) Hollywood, the glamour capital of the world, join us in a make-believe search for the most beautiful girl on Earth! (Yes, it's The $1.98 Beauty Show, an entertainment spectacular, if ever there was one, where beauty is not only in the eyes of the beholder, but also on this very stage! Tonight, The $1.98 Beauty Show will continue its relentless spoof of all of those other so-called beauty contests, and although this is not a real contest, we will bring you our version of the all-American beauty, that one-of-a-kind girl who not only has personality and poise, but beauty and talent as well! Yes sir, The $1.98 Beauty Show will be bringing you tons of talented and beautiful women every single week! Happy women, terrified women, women singing, dancing and parading about in the latest bathing suits, from the halls of Montezuma, and to the shores of St. Tropez!) And now, here's the host and star of the show, MR. BEAUTY HIMSELF, RIP TAYLOR!"

The $1.98 Beauty Show was a Chuck Barris creation that spoofed beauty contest with six women (from eighteen to eighty years old) competing in a mock beauty contest.

This show was a completely make-believe beauty contest. Six women were vying for the title of $1.98 beauty of the week. There were three segments: introductions, talent, and swimsuit.

Each girl (introduced by Rip) came out one by one, to be judged by a panel of three celebrity judges.

The six girls each performed in a variety of ways in the talent round.

Finally, all six, one at a time, came out in gorgeous swimsuits. After each one came out, they stood at the right side of the set with the show's title on it.

At the end of each show, host Rip was given a piece of paper (delivered by Chuck Barris staffer Larry Spencer in a jester costume) to announce the week's winner. The winning lady won $1.98 (personally given by Rip via the coin-belt), a lousy crown, sash and a bouquet of rotten vegetables. The winning woman walking "The Plank of Pulchritude" was treated to a song sung by Rip, which was a parody of "Here she is, Miss America".

"The preceding program was not a contest and was intended as entertainment only. All winners were selected by the production company." 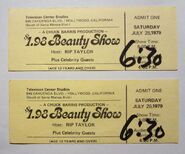 The Plank of Pulchritude Lyrics[]

You win the prize!

You take the cake!

You get the crown, and a dollar ninety-eight!

You ring the bell!

You hit the spot!

You have such grace!

We love your smile, and just look at that face!

Your dream came true, and may your shining star!

Stay with you, whatever you do!