The $64,000 Question was a game show where contestants would pick a category and answer a series of questions increasing in difficulty starting at $64 and doubling up to $64,000.

At the $4,000 level, a contestant would return each week for only one question per week. They could quit at any time and retire with their money, but until they won $512, if they got a question wrong, they were eliminated without winning anything. Once the contestant won $4,000, if they missed a question they received a consolation prize of a new Cadillac. Upon reaching the $8,000 level, they were placed in the Revlon isolation booth, where they could hear nothing but the host's words.

As long as the contestant kept answering correctly, they could stay on the show until they had won $64,000.

Three years after it exploded into a nation's consciousness, The $64,000 Question and its progeny were dead. Having faded in popularity as it was, in the wake of the hugely popular Twenty One championship of Charles Van Doren, The $64,000 Question and The $64,000 Challenge were yanked off the air within three months of the quiz show scandal's eruption. Challenge went first, in September 1958, with Question (once the emperor of Tuesday night television) taking its Sunday night timeslot until it was killed in November 1958.

The relatively new, but phenomenally popular, Dotto, and then Twenty-One, were found to have been rigged and were promptly canceled. Then one Challenge contestant, the Rev. Charles Jackson, told the federal grand jury probing the quiz shows that he received answers during his screening for his appearance. That prompted Challenge’s sponsor, the Tobacco Company (Kent, Old Gold cigarettes), to drop the show.

Question had the opposite problem: sponsor Revlon (possibly under pressure from its chieftain, Charles Revson, who has been credited with expressing the desire for famous faces that prompted the expansion of Challenge to include celebrities) often tried to interfere with the production of Question, including and especially trying to bump contestants it simply disliked, no matter whether the audience liked them. Revson's brother, Martin, was assigned to oversee Question, including heavy discussions of feedback the show received. The would-be bumpees were believed to include Joyce Brothers herself, who proved strong enough that the bid to bump her finally ended, and she continued on to the maximum prize.

According to producer Joe Cates in a PBS documentary on the scandals, he used an IBM sorting machine to give the illusion that the questions were randomly selected; in fact, all of the cards were identical. Since all of the buttons were on one line, they were mostly for show.

It was revealed during Congressional investigations into the quiz show scandal that sponsor Revlon, was as determined to keep the show appealing, even if it meant manipulating the results, as the producer of Twenty-One (albeit also under sponsor pressure) had been. But unlike with Twenty-One and Dotto, where contestants got the answers in advance, Revlon was reportedly far more subtle: they may have depended less on asking questions on the air that a contestant had already heard in pre-air screenings than on switching the questions kept secure in a bank vault at the last minute, to make sure a contestant the sponsor liked would be suited according to his or her chosen expertise.

The most prominent victim may have been the man who launched the franchise in the first place. Louis Cowan, made CBS Television president as a result of Question’s fast success, was forced out of the network as the quiz scandal ramped up, even though it was NBC's and not CBS' quiz shows bearing the brunt of the scandal – and even though CBS itself, with a little help from sponsor Colgate-Palmolive, had moved fast in cancelling the popular Dotto at almost the moment it was confirmed that that show had been rigged. Cowan had never been suspected of taking part in any attempt to rig either Question or Challenge; later CBS historians have suggested his reputation as an administrative bottleneck may have had as much to do with his firing as his tie to the tainted shows. Cowan may have been a textbook sacrificial lamb, in a bid to pre-empt any further scandal while the network scrambled to recover, and while president Frank Stanton accepted complete responsibility for any wrongdoing committed under his watch.

By the end of 1959, all the first generation big-money quiz shows were gone, with single-sponsorship television following and a federal law against fixing television game shows (an amendment to the 1960 Communications Act) coming. Except for a short-lived ABC quiz show called 100 Grand, the networks stayed away from awarding five-figure cash jackpots until the premiere of The $10,000 Pyramid in 1973. The disappearance of the quiz shows gave rise to television's next big phenomenon–Westerns.

None of the people who were directly involved in rigging any of the quiz shows faced any penalty that was more severe than suspended sentences for perjury before the federal grand jury that probed the scandal, even if many hosts and producers found themselves frozen out of television for many years. One Question contestant, Doll Goostree, sued CBS and the show's producers, in a bid to recoup $4,000 she said she might have won if her Question match had not been rigged. Neither Goostree nor any other quiz contestant who sued similarly won their cases.

The game started out with two players, and a qualifying round where general knowledge questions were asked as tossups. $1,000 was awarded for a correct answer and deducted for a wrong answer or running out of time; also, the question had to be completed before an answer was allowed. The first player to score $8,000 moved on to the isolation booth.

As with the original series, the remaining questions were on one subject of the player's choosing. At this point, the player was shown two sub-categories, picked one, and was asked a $16,000 question which consisted of a multiple-choice question with three possible answers. The player could not bail and had to try to answer the question within 30 seconds. This was repeated with the $32,000 question (with four choices) and $64,000 (with five choices). Correctly answering the $64,000 question meant that the player was guaranteed at least that much money.

At this point, the sub-category choice was removed and questions were no longer multiple-choice. The $128,000 level was a two-part question, followed by $256,000 and three parts, then $512,000 and four parts, and finally $1,024,000 with six parts (of which only five needed to be answered correctly). The time limit remained at 30 seconds throughout and, despite the questions becoming progressively more complex, was for the entirety of each question rather than being for each individual part.

Two board games were released by Lowell.

A quiz book based on the show was published by Dell in 1955. The small paperback features questions ranging from $1 to $64,000 in dozens of categories.

A record album entitled $64,000 Jazz was issued due to the popularity of the Jazz category at the time. 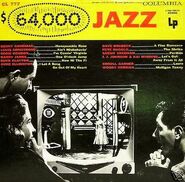 Malcolm Searle served as the original host, with Roland Strong as announcer. Roland took over as emcee from February 21, 1963 onward, with Max Rowley taking over as announcer.

Players who failed to answer all eight questions correctly would receive a prize based on how many questions they did answer correctly.

The Mexican version, El Gran Premio de los 64,000 pesos (The Grand Prize of 64,000 Pesos) lasted from 1956 to 1994 with some interruptions, changes of name to compensate peso devaluation, and changes of TV network. Most of the time it was hosted by Pedro Ferriz.

A movie was made in which Ferriz asks questions to a character played by Sara García, known then as "Mexican Cinema's Granny".

The Polish version of this quiz was Wielka gra (Great Game, 1962–2006). Initially studio and rules were identical as in original, but in 1975, the rules and studio became a bit changed by Wojciech Pijanowski, author and host of plenty of quiz shows in Poland in late 20th century, the isolation booth was abandoned, and there was set a big round in the center of studio with prizes for each round and envelopes with questions. After this year, categories became more accurate (e.g. Mozart - life and compositions, Muslim conquests in 7th to 8th century), limited to art, history (most categories), geography and zoology and were chosen by player during eliminations to the quiz.

After 1975 game had following rounds:

Despite this the show was cancelled due to low attendance, cancellation was considered as a scandal due to high value of this show by many people, especially attendants of the show, and leaving some non finished and not started planned games.

The show had plans to be restored in 2016 as Większa gra (The Bigger Game) in changed formula, but eventually the plans were cancelled.

The Swedish version of this quiz was Kvitt eller dubbelt (Double or Nothing) running from 1957 until 1994.

Louis G. Cowan - Based on the radio show Take It or Leave It