The American Bible Challenge is a Biblical-themed quiz game show that focuses on religious and biblical studies.

A Bible story is revealed, and the teams are asked three multiple choice questions about that story, with each question having four possible answers. The player that buzzes in with the correct answer earns his/her team 10 points; an incorrect answer loses 10 points, and opens up the question to the other teams. Players must wait until after the host reads the entire question (including the choices) to buzz in.

Round 2: Games in this Round Changed Daily[edit | edit source]

The host shows the teams a post from a Biblical figure's fictional "Faithbook" (a biblical-themed parody of Facebook) wall. The teams are asked a question about that post (generally, from an additional clue, identifying the person who might have made that post). Each question is worth 25 points, with 25 points deducted for a wrong answer. Teams must wait until the entire post is read before they can buzz in. Three questions are played in this round.

Foxworthy reads a question about a crime committed in the Bible, with teams ringing in to identify who the culprit was or what weapon was used to commit a crime. The same rules "Faithbook" apply here.

In this round, each team has a chance to win 25 additional points. Before the show, a question was asked to 100 You-Version App users (e.g. "Would you rather fast for 40 days or eat manna for 40 years?"). Then, a question is asked about the percentage of people who answered (e.g. "What percentage said they would rather fast for 40 days than eat manna for 40 years?"). The question has 3 possible choices, and the teams who have it correct win 25 points.

In the second half of the round, each team plays a physical game. 60 seconds are put on the clock, and a question is read about a Bible character. The members on the team have to do something such as put a fork in a cup with the right answer on it. Others have three-player physical game and the time limit is changed to 90 seconds. The team with the most correct answers after 60/90 seconds wins 50 points.

This is new to the second season.

Before this round, the teams each set their strongest player aside for the "Chosen Three" round. This player moves to an area behind the teams, and cannot participate in this round. The host then asks each team, in turn, a question based on an announced category. Each question in this round is worth 50 points, with no penalty for an incorrect answer. Only the two players standing at the podium may confer and answer the question. Two questions are asked to each team in this round, with the first question being presented in a dual-choice format (with the same two choices for each team's question), and the second question having three choices. Some questions have three parts, and each correct answer is worth 25 points, with the option to risk it all to double the points or quit with what they've earned, but if the team decides to risk it all and gets an incorrect answer, the team loses the points earned.

In this round, the player that was set aside from the previous round stands alone at the podium, with their teammates standing in the area behind them. The host asks each player, in turn, a question with six choices; three of the choices are correct. The player then makes three selections without conferring with the rest of their team. Each individual correct answer is worth 100 points, thus, a total of 300 points are available to each team in this round. The two teams with the highest total scores advance to the "Final Revelation," while the third-place team is eliminated with $2,500 for their charity.

Round 5: The Final Revelation[edit | edit source]

Prior to the round, the host reads the teams the category for the final round and gives each team a copy of the Bible. The teams then move to a backstage area, and are permitted 10 minutes to study the Bible for any information based on that category. In Season 2 whenever they're backstage, the teams will also have the option to use the You-Version App of the Bible on their Electronic Tablet along with the copy of the Bible. After the 10 minutes are up, the first team comes on-stage; the second team is placed in a sound-proof booth. The host asks each team questions from the announced category, going in rotation among the team. Each team has 60 seconds to answer as many questions as possible. Both teams play the same list of questions, and the team that answers more questions correctly wins $20,000 for their charity; the runners-up win $5,000 for their charity.

If both teams tied with the same number of correct answers after Round 5, a Tiebreaker Round is played. One player from each team will use their tablets to write down the number answers to the questions. Whoever is the closest to the actual number that the question is asked wins. This process is repeated with a Wild-Card Spot high scorers among non-winners whenever the two teams defeated the Semi-Final Match and goes on to the Grand Finale. 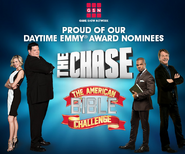 In addition, versions for the iPhone, iPad and Android devices were also released in 2012. 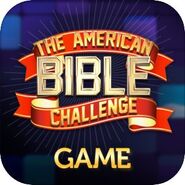 In an effort to promote the show's second season, Schmidt released a study book entitled The American Bible Challenge: A Daily Reader, Volume 1 in 2013. The book features nine weeks worth of study and questions previously seen from the show. Each day introduces a different lesson and passage of scripture with five questions being asked at the end of the day's lesson.

A board game entitled The American Bible Challenge Board Game (featuring both Kirk Franklin and Jeff Foxworthy on the cover of the box) was released by TailCor in 2014. 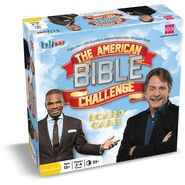 The Making of The American Bible Challenge - A behind-the-scenes making of the show special that also aired on GSN in 2012.

Retrieved from "https://gameshows.fandom.com/wiki/The_American_Bible_Challenge?oldid=229404"
Community content is available under CC-BY-SA unless otherwise noted.