The topic of this page has a Wikia of its own: The Apprentice Wiki.

The (New Celebrity) Apprentice features sixteen businesspeople compete in a business-type elimination contest, for the right to run one of host Donald Trump's (later Schwarzenegger's) companies.

The contestants (who are referred to as candidates) come from backgrounds in various enterprises, but typically include backgrounds in real estate, accounting, restaurant management, consulting management, sales, and marketing. During the show, these contestants live in a communal penthouse, allowing their relationships to build. The only exception however, was in the sixth season, when the show moved to Los Angeles; Teams had been separated, with the winning team living in a mansion and the losing team taking up residence in tents located in the mansion's backyard. These candidates are placed into teams, and each week are assigned a task and required to select a project manager for the task. The winning team receives a reward, while the losing team faces a boardroom meeting in order to determine which team member should be fired and eliminated from the show.

Eliminations proceed in two stages. In the first stage, the entire team is confronted with their loss in a boardroom meeting. The project manager is then asked to select up to either one, two, or three of their team members who are believed to belong in the final boardroom meeting. In the second stage, the rest of the team is dismissed, while the project manager and the selected members face a final boardroom showdown where at least one of the candidates is fired and subsequently leaves the show.

Trump reserves the right at times to do the following: not allow the losing project manager to choose who goes into the boardroom for a final hearing, fire any candidate without a final boardroom session if there's enough information to warrant so, and fire multiple people if they are found liable for an unsatisfactory performance. On occasion, candidates will leave on their own free will; while this is usually discouraged, Trump does accept their resignation(s). When the final three or four candidates are left, an interview process typically begins, involving executives from various companies who interview each of the finalists and report their assessments of them to Trump. After which, a firing takes place where one or two people are usually fired.

(With the exception of the sixth season) The final two are then assigned different tasks, along with support teams composed of previously fired candidates. After the tasks are done, a final boardroom occurs, with testimonials from the team members and a last chance for the final two candidates to prove themselves to the target CEO. Finally, Trump hires one of the two candidates to become his Apprentice.

A board game was released by Parker Brothers in 2005. 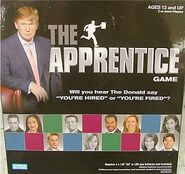 Various DVD seasons have been released.

Two PC games have been made by Legacy Interactive and have been released in 2006 and 2007 respectively. 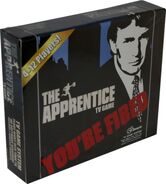 Video Slot Machines based on the series have been released by IGT/International Game Technologies including Season 2 and Enhanced.

The Apprentice also spawned a reality television dating game show. On June 17, 2010, Donald J. Trump Presents The Ultimate Merger premiered on TV One. The series stars Omarosa Manigault-Stallworth, a former political consultant who in 2004 appeared on the first season of The Apprentice and once again in 2008 on the first celebrity edition of the show. Each of the twelve contestants vying for the affections of Manigault-Stallworth were selected by Trump himself.

In 2015, movie star and former governor of California Arnold Schwarzenegger was "hired" to replace Donald Trump as the new host of Celebrity Apprentice; as Trump is still in the race for the Republican presidential nomination.

On February 2, 2005, NBC announced that they would broadcast the first spin-off from The Apprentice, called The Apprentice: Martha Stewart. The show, which ran from September 21 to December 21, 2005 was hosted by Martha Stewart, who was the first woman in the world to become a self-made billionaire. It kept the format of the original series but changed a few elements to fit Stewart's personality. Trump was one of the executive producers of the show and castings were held in 27 cities across the United States.

The fourth season of The Apprentice earned less than spectacular ratings, while The Apprentice: Martha Stewart struggled. Trump claimed that there was "confusion" between the two shows. There has also been talk that Trump did not want Stewart to host the spin-off show. NBC announced that it would not bring back the show for a second season, although the network stressed that the show was initially planned to air only for one season. The show averaged between six and seven million viewers. Before the show left, both Donald Trump and Martha Stewart had a fight due to Stewart accusing Trump that he didn't want her to have a successful show, that he might have wanted it jinxed. Trump denied this charge, and both TV stars have not worked together again, and there are no plans for the future.

The following are places that have done their own versions of The Apprentice:

Trump's Opening Theme - "For the Love of Money" by The O'Jays