On The Art Linkletter Show, players tried to guess on how people would react to practical jokes.

This show was a short-lived audience participation series that presented amusing incidents in everyday life, some filmed with a hidden camera. Celebrity guests and studio audience contestants tried to guess the outcome. Contestants received cash for playing the game. 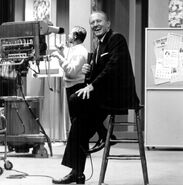 Art Linkletter on the set of his show

By April, celebrity guests did the guessing. Among the regulars were Carl Reiner and Jayne Meadows.