The topic of this page has a Wikia of its own: Bachelor Nation.

The Bachelor is a long-running reality dating show.

The series revolves around a bachelor who chooses a potential wife from among 25 women. In past seasons, bachelors have included a doctor, a prince, an NFL player, a millionaire, and other types of frequently sought after men. The show follows the bachelor as he goes on a series of dates with the women, some of them group dates, some one-on-one dates, and some of them two-on-one dates. On each episode women are eliminated, generally during the rose ceremony at the end of the episode, but sometimes on the dates (during what are called "elimination dates"). The process culminates towards the end of the season with hometown visits to the final four women's families, the three final women each going on an overnight date to exotic location, and the meeting of the bachelor's family and each of the two final women. At the end of the show, the bachelor chooses one woman with whom he would like to continue a relationship. Sometimes he proposes marriage, sometimes other levels of commitment. There have been a few interesting twists such as Brad not picking either of the women and Jason changing his mind during the "After the Final Rose" show.

The runner-up from the first season, Trista Rehn, later starred in The Bachelorette, a spin-off program in which the format is gender-reversed. Her wedding to the winner of her season of The Bachelorette was also televised.

According to the summary on ABC.com, each new Bachelor episode contains a rose ceremony during which one or more contestants is eliminated. Eliminations are based upon date performance (i.e., how the women relate to the bachelor on the dates.) The bachelor must follow a process of elimination where his pool of bachelorettes is narrowed down week by week by presenting a rose to each of the women he wishes to keep.

At any point during the process, if a woman decides she is no longer interested in the bachelor, although he may still be interested in her, she may leave. A few have actually done so over the course of the show.

In the end, the bachelor selects one lady and gives her the final rose. He may or may not propose to her at this final rose ceremony.

As of the end of season 13, none of the 13 bachelors has married the woman to whom he presented the final rose (and one did not present a final rose at all).

Solid ratings throughout the twelve completed seasons have resulted from an average audience of nearly 10 million viewers, with some decline in the series' more recent seasons. While much of the series has aired on Wednesday nights, its ratings slide reversed somewhat with a move to Monday nights in January 2006.

Chris Harrison hosts this live after show featuring discussions and analysis of the most recent episode of The Bachelor which details Ben Higgins' search for his soul mate. Members of The Bachelor cast join the conversation alongside a variety of celebrities who are fans of the show. Viewers would also be able to express their opinions when Harrison reveals their questions and comments. Also featured are exclusive deleted scenes, hilarious bloopers and additional bonus content that will not be found anywhere else. The series started on January 4, 2016 and concluded on February 1, 2016.

Countries that have done their own versions of The Bachelor include:

Video games based on the show were developed by Ludia and have been published for the Wii, DS, iPhone, iPod Touch and iPad by WB Games from 2010-2011. 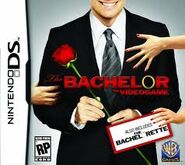 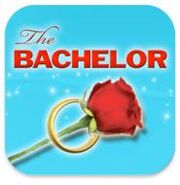 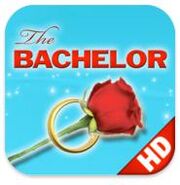 iPad icon
Add a photo to this gallery

In 2006, the box office flop Date Movie spoofed the show as The Extreme Bachelor: Desperate Edition where Grant Fonkyerdoder and Julia Jones (played by Adam Campbell and Alyson Hannigan respectively) are reunited for the first time, this included Chris Harrison who also makes a brief cameo appearance in the film as the host of this said spoof.

ADDITIONAL NOTE: When the bachelor (Grant Fonkyerdoder/Adam Campbell) is told by Harrison to pick one girl and eliminate the rest, a sped-up version of the Sheila Cole-era theme of The Price is Right can be heard in the background. The music was created by David Kitay.
In 2013, Jimmy Kimmel Live spoofed the shows by showing a series of skits chronicling young children participating. This process was called The Baby Bachelor.

Retrieved from "https://gameshows.fandom.com/wiki/The_Bachelor?oldid=230640"
Community content is available under CC-BY-SA unless otherwise noted.