"These three players will compete in a classic battle of knowledge and strategy, and one of them will have the chance to win a top prize of $5,000/$10,000 in cash, today on (THE BIG) SHOWDOWN!! And here's your host, MR. JIM PECK!!"

The Big Showdown (originally called Showdown in the pilot) was a short-lived game show where contestants compete to roll the dice for $10,000 in cash.

Three contestants competed in a question & answer game for the right to roll the dice for $10,000. Along the way, their objective was to reach a series of "Payoff Points" to win some money. They had to be hit right on the nose; they couldn't be exceeded.

The contestants were shown six categories with different point values (indicated by the die above each one) from 1 to 6 points. Then a Payoff Point was revealed, after which host Peck pressed a button on his podium to stop a randomizer to select one of five money amounts in the following configuration: $25, $50, $75, $100, $50, $500.

Occasionally, one or more such point values would put one or two contestants over the Payoff Point; when that happened, the player(s) involved would be blocked (indicated by the "X" on their podiums) from those questions. Each time a contestant hit the Payoff Point exactly, he/she won the landed money amount for that Payoff Point.

After the second Payoff Point was hit, six new categories were placed on the board. To end the round, the game was put on a 90-second timer in which every Payoff Point after the last one played before timer began (if it wasn't reached yet) was worth $100. When time was up, the two players with the highest scores advanced to the Final Showdown, while the last-place player was eliminated and kept any cash he/she accumulated during the round.

If this round ended in a tie for second place (or if all three tied), Jim read a series of one-point toss-up questions until somebody buzzed in with a correct answer, thereby advancing to the Final Showdown. Should a player buzz in and answer wrong, his/her opponent automatically advanced.

In the Final Showdown, the remaining two players competed to reach the final Payoff Point of 7. They faced a new board of three categories worth 1, 2, and 3 points respectively. The player with the highest score at the end of the previous round picked a category first. As always, the questions were toss-ups with the contestant buzzing in with a correct answer earning the points. The first player to reach the Payoff Point won the game, $250 ($200 in the pilot), and the right to roll the dice for $10,000; the runner-up took home whatever cash he/she accumulated in the front game.

In the bonus round, the winning contestant stood at a dice table with a well at the end, with a mini hole for Jim to remove the dice. The contestant rolled pairs of dice which had the sixes replaced with the words "Show" and "Down", and had to roll "ShowDown" to win the big money.

The contestant had one roll to start. If he/she rolled "ShowDown", they won $10,000; if it was anything else, the number rolled (from 1 to 10; Show and Down were each considered a zero) became the Payoff Point for that round. The winning contestant had 30 seconds to roll as many dice as possible. Each time the winning player rolled the Payoff Point, s/he won $250 plus five bonus seconds of rolling time at the end. If the player could roll "ShowDown", he/she won $5,000 plus any money accumulated from reaching/rolling Payoff Points.

If the 30 seconds ran out without a "ShowDown" roll and the contestant had rolled the Payoff Point at least once, the bonus game proceeded as before with his/her accumulated bonus time. The only difference was that the Payoff Point was taken out of play.

In the pilot, the clock stopped and five additional seconds were added whenever the Payoff Point was rolled, although this rule ended up not coming into play. Other than this, the rules were the same.

Notably, the $10,000 grand prize was only mentioned shortly before the contestant's first roll (to set the Payoff Point). Until this point, the secondary prize of $5,000 had been mentioned throughout the body of the show.

Heather holds the dice; the sixes are replaced by "Show" and "Down".

Jim then shows Bob the clock and informs him, "That was it." Bob had rolled ShowDown as the clock struck zero.

This was the very first show hosted by Jim Peck.

The show was best known for the infamous Big Falldown on show #67. What happened was that after being introduced, Jim walked down the stairs as usual; however, when he got close to his podium, he encountered one step that caused him to slip & fall, causing an uproar of laughter and cheers. A few seconds after he reached his podium, Jim said, "Sure. You people would applaud a lynching!" After the second commercial break, Jim walked back to the staircase & kicked the offending stair.

The top prize was finally won on the 100th episode. The day’s champion got “ShowDown” on her first roll, winning the $10,000. For the entire next week of episodes, the clip of her win began each episode.

The Big Showdown premiered & ended on the same days as another Don Lipp program that aired on ABC, The Moneymaze. 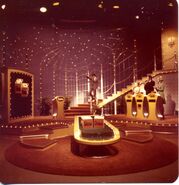 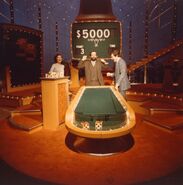 The ShowDown dice themselves.

The Big Showdown is a Don Lipp and Ron Greenberg Production.