The CNN Quiz Show is a series of game show specials where three teams of two CNN anchors each battle it out for their favorite charities in a wild quiz show that test their knowledge of specific trivia.

Three teams of CNN anchors play a series of trivia rounds to see how much they know about the world around them.

It's a simple "buzz-in to answer a question" round. Anderson asked a series of questions each with four possible answers. The first anchor on any team to buzz-in with a correct answer scores 10 points for his/her team. Upon buzzing in, one half of a team's score board monitor turned red (depending on who was in first). All questions are jump-ins meaning that they don't have to wait for the question to be finished. A wrong answer gave the opposing teams a chance to answer. And no conferring is allowed.

NOTE: The SFX for this round is borrowed from the "Face-Off" cue from Family Feud. However, for the sound's pitch, it's lower in the "Presidents Edition", but higher in "The Seventies Edition", and normal in the "TV Edition" and "Famous Americans Edition".

Two random anchors (one from two different teams) face off in a round of 20 point questions. They stood before a red box with a big golden service bell on it. The first anchor to ring the bell and give the correct answer scored 20 points.

Each team had 60 seconds (one minute) to go through a series of pictures of famous people, places & things. A picture would come up on the screen, then the clue giver would give clues to what's in the pictures. S/he can say anything they want short of actually saying the answer; s/he also cannot do sounds like or rhymes with, and no initial letters of the answers. Each correct answer was worth 30 points.

Each team was shown four items and were given a series of facts about the items (one fact for each item). The team in control had 60 seconds (one minute) while taking turns to get as many right as they can. Each correct answer was worth 40 points.

There were three categories in the round. The team in control chose a category and the category meaning and a list of five people were presented. Then another list of items appeared and the object of the round was to match each person with each item in as little time as possible out of 60 seconds (one minute). This round was played on a touch screen where the anchors moved each item to which answer they each belong to. Points were awarded according to how fast they finished and/or how many they got right.

Now here's how they score:

Final Round: The Big Bet[]

This was the Final Jeopardy! of the game and not to be confused with the final card on Card Sharks' Money Cards. During the final commercial break, all three teams each place their bet as to how much of their current scores they were willing to risk on one final question. One final group of four items were shown and starting with the trailing team, they each chose an item to play with. When an item was chosen, a video of the chosen item was shown. After that, the question about the chosen item & attached video was asked and the team in control had 15 seconds (20 seconds from episode 1) to think of an answer. A correct answer added the wager but an incorrect answer deducted the wager.

NOTE #1: Jake Tapper did a little Jeopardy! act when his team made a choice and gave their answer.

NOTE #2: Upon winning the game, the "CNN" logo on the winning team's podium blinked.

The total prize pool on offer is $40,000 and here's how the money is divided:

Special #5: Race for the White House[]

Race for the White House Edition 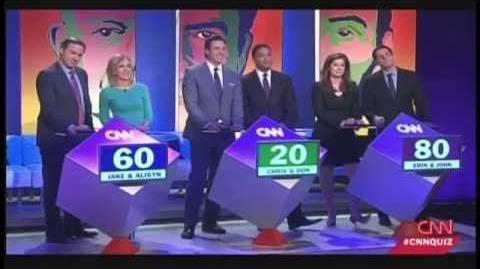 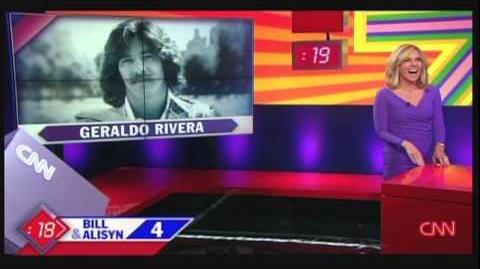 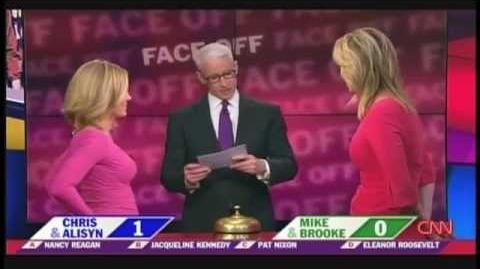 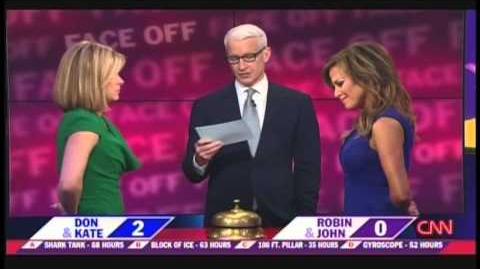 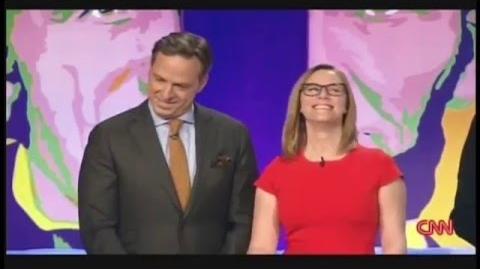 The CNN Quiz Show Race for the White House (2016)
Community content is available under CC-BY-SA unless otherwise noted.
Advertisement