"This is our champion, Linda Emstein. Today, Linda will compete for our top prize of $13,000 in cash on THE CHALLENGERS! And here's your host, Alan Roberts!"

The Challengers (not to be confused with the 1990-91 syndicated show with Dick Clark and also by Greenberg) was an unusual unsold game.

Two contestants competed and every question was worth $100 with the goal being $1,000. The game started with a toss-up question. The first player to buzz-in with a correct answer received control of the game; this meant that he/she could continue to answer questions until either reaching the goal of $1,000 or missing a question and losing $100 for it; along the way, however, the contestant in control could freeze and force his/her opponent to answer the questions until surpassing his/her current score; or risk losing control by making the next question a toss-up. On the earlier, if the challenged player failed, the challenger won the game.

Once the $1,000 was reached, the player who reached it won a jackpot which started at $6,000 and grew by $1,000 for each game it was not won. If the player won by either beating his/her frozen opponent or by successfully challenging the opponent into defeat, that player had to answer more questions correctly in order to get the 10 he/she needed to win the jackpot.

Alan would later serve as announcer on The Moneymaze and The $50,000 Pyramid, also taped in New York. Both he and his predecessor Bill Wendell would later serve as announcers of The Late Show with David Letterman. Wendell retired in 1995 (having passed away in 1999) and Kalter immediately succeeded him (having passed away in 2021). 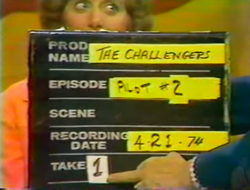 The Challengers at The Game Show Pilot Light