"Today is (insert date). This is (insert champion's name), he/she is (insert number) step(s) away from an Ultimate Challenge worth (insert jackpot amount)/returns with (insert grand total). (insert challengers). (champion) is the champion. (Challengers,) You are… The Challengers! And now, here's your master of the challenge, DICK CLARK!"

The Challengers was the one year old game show and revival of The Who What or Where Game, where three contestants (one being a returning champion, and the two others being challengers) answered general knowledge & current events questions to win cash.

Not to be confused with the 1974 CBS unsold pilot of the same name.

To start, all three contestants were given a starting bankroll of $200 (originally they started with nothing). Clark then asked a series of rapid-fire toss-up questions. The first player to buzz-in with a correct answer won $100, but an incorrect answer lost $100. Originally on a miss, the opponents got a chance to answer; this was later changed to the question automatically ending (ala Sale of the Century). The round lasted for 60 seconds (one minute (1:00)) and when time was up, the player with the most money earned control of the board.

In each round, six categories were displayed on the video wall. The player in control selected a category and three sub-categories were shown with money amounts attached to each. The contestants then selected in secret which question they wanted to answer. After the selections, the questions were asked in order of value from lowest to highest, and to the player(s) who chose them. If all three contestants selected a different category, then everybody would receive their own question; if two selected the same sub-category, a toss-up question was asked to both of them, leaving the third contestant with a solo question; but if all three players selected the same sub-category, then the values of all the questions were doubled and all three players got the question they chose for a chance to "run the board".

Dollar values were doubled in the second round, and any player who finished Round 2 with zero or a negative score, was eliminated from the game (a la Jeopardy! and its spin-offs).

Play continued until all the categories were taken or when time was up.

When the show began, all dollar values were generous, but as of December 10, 1990, they were diminished for the rest of the run.

The sub-categories from the category "Suit Yourself"

All three players have wagered the same amount, so all three questions are now worth $200, $300, and $400, respectively.

The final round of the game was appropriately called "The Final Challenge". In this round, one last category was revealed followed by three sub-categories each with different payout odds posted below (Even, Double and Triple). The bigger the odds, the harder the question. When Clark said "And the challenge is yours", all three contestants (or whoever was left) had 15 seconds to choose a subcategory and make one final wager, which could be any or all of their current scores. Unlike the main rounds, only one player could answer each question; if two or all three players chose the same subcategory, the highest wager would get the question. Contestants in play were asked the questions they chose in order of difficulty and a correct answer added the value of the wager multiplied by the odds, but an incorrect answer deducted only the value of the wager.

In the event that only one contestant made it to "The Final Challenge", the round played just like the situation when all three selected the same question; for that one remaining player had a chance to run the board. He/She chose a sub-category, followed by giving a verbal wager, and then the question was asked. A correct answer added the value of the wager multiplied by the odds and the right to choose another question, or stop right there, but an incorrect answer deducted only the value the wager and automatically stopped progress.

All contestants who didn't finish in the red were allowed to keep all the cash they won, but the player with the most money became the champion and returned to play the next show against two new challengers. Champions stayed on the show until they were defeated. If two or three contestants were tied at the end of the game, the tied players returned. A two way tie happened on November 12, 1990.

The sub-categories; the Final Challenge category is "Famous Battles"

All three contestants are ready for The Final Challenge

All three players are wagering on the sub-category "The Civil War", with Triple odds. Since Bryce has the highest wager of all three players, he alone gets the question. If he gets it wrong, he finishes with $1,245; but on the upside, if he gets it right, he'll win $4,365 more and finish with a total of $7,065.

Final scores; for those who are curious, the winning question was, "After his early victory in the Civil War, Robert E. Lee was free to invade Maryland. But Union forces intercepted his battle order, and his invasion of the North was halted in the Battle of Sharpsburg. What is the more familiar name of this battle?" The correct answer was "Antietam".

The Ultimate Challenge was a special bonus round played by the championship player in which he/she had to correctly answer one or more questions to win even more money.

When the show started, in order for champions to play the Ultimate Challenge, they had to win three consecutive games. During this time, the Ultimate Challenge was always played at the beginning of the show. To start, the champion (who would stand at a hexagonal platform in the middle of the set) was given a choice of two categories. When the champion made his/her choice, the three sub-categories under that category were revealed and host Clark read each question under each sub-category (one for each) in order of their difficulty. If the champion could answer all three questions correctly, he/she won a cash jackpot which started at $50,000 plus $5,000 for every unsuccessful attempt. This was later changed to starting at $25,000 plus $1,000 every day until won.

Champion Larry Kaplan was the first contestant to win the Ultimate Challenge which, was worth $60,000.

Starting with the November 13, 1990 show, the Ultimate Challenge followed the tradition of the other self-contained game shows with a bonus round, for it was played at the end of the show. This time only one category was shown and one question was asked. If the question was answered correctly, the champion won $10,000.

This show had a unique way of paying its contestants. Originally, they had the option of either receiving the money via check when their episode(s) aired, as per game show tradition, or assuming they had a CitiBank Visa or (in later months) MasterCard account, they could instead have their winnings directly deposited into that account. The latter option was usually always taken, thus leading to the option being eliminated towards the end of the run.

For the first two months that the show was on the air, contestants were not only competing to win money but were also trying to earn spots in the show's Tournament of Champions. The tournament was conducted during the week of November 12, 1990, with a structure that was similar to the one employed by Jeopardy! during its own tournaments. Nine players competed on the first three days of the tournament, with the three winners playing a two-day cumulative score final. All three players kept whatever they earned in the two games, with the tournament winner earning an additional $25,000. Negative scores on either day of the final (while still eliminating the player from The Final Challenge) factored into the final total to determine the winner.

After the match played on the November 9 episode, the field was set. Eight of the spots were filled by former champions. On the November 9 episode, reigning champion Stan Newman won his second match and his total to that point made him one of the nine highest winners. In an unusual move, as many game shows that conduct tournaments like this do not feature sitting champions, Newman interrupted his reign as champion to compete in the tournament.

Nine teachers competed, using the same format as the Tournament of Champions; $10,000 was awarded to the winner.

The Challengers invited nine more champions back for a second tournament of champions, which was held during the week of March 18, 1991. The Challengers’ Invitational Tournament was conducted the same way that the Tournament of Champions was, with a two-day cumulative score final determining the champion, and $10,000 awarded to the winner on top of what they had earned in the two-day final. Lorin Burte won the Tournament by recording a total of $34,600 in the final, with the $10,000 bonus added to that and the $46,075 won during his reign as champion, and finishing with $90,675. 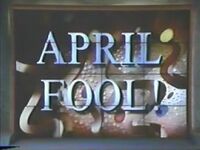 On April Fool's Day, in the first round after the Challengers Sprint, a nasty joke was played on Dick and the contestants. The video wall displayed six unusual category names:

Mike Dwight, the leader at the end of the Challengers Sprint, and one of the two challengers of that day, picked "Pre-Columbian Architecture", and Dick wondered what's going on, and what were the real categories; that's when a birthday party-like "APRIL FOOL!" sign popped up on the wall, giving everyone a big laugh.

Dick later asked Judge Gary Johnson, "Is this your idea?" Gary replied, "I thought it was appropriate for the day even though I was curious to hear what they had to say about Burundi." Dick answered back, "Go to your room!" That's when the real first round began.

Some stations didn't premiere the show until the week of Monday September 10th, due to Labor Day pre-emptions on many stations that carried The Challengers due to CBS' then coverage of U.S. Open Tennis or the 1990 edition of the Jerry Lewis MDA Labor Day Telethon.

The show's early demise was threefold: The 1990/91 season saw a glut of syndicated games (revivals of The Joker's Wild and Tic Tac Dough, Trump Card, Quiz Kids Challenge), resulting in overcrowding. Not only that, but the show often got demoted to bad timeslots like overnights in major markets, and some never even saw the show. And even if the show did get a good timeslot, the Jeopardy! and Wheel of Fortune combo often shot it down decisively in the ratings, or, barring that, it would have to compete with syndicated newsmagazines, such as Entertainment Tonight; syndicated judge shows, such as The People's Court, or syndicated talk shows, such as The Oprah Winfrey Show (which is why many stations demoted The Challengers after a few months).

On his set of The Challengers, Clark sent a video message to John Davidson by wishing him good luck as the host of the revival of The $100,000 Pyramid during the latter show's 1991 premiere.

Gary Johnson, the show's judge/writer/producer, was, until 2012, of the judges/writers/producers on Jeopardy! Before working on this show, he was the producer for Scrabble.

Though the Challengers Sprint Round used the one question per player format in later shows (a la Sale of the Century), the buzz-in sound always came from Sale, albeit much higher-pitched and abridged (thus sounding more similar to Boardwalk & Baseball's Super Bowl of Sports Trivia’s ring-in sound).

KDFW's newspaper ad for The Challengers

WTIC's newspaper ad for The Challengers

KGAN's newspaper ad for The Challengers

KVUE's newspaper ad for The Challengers

KXTV's promotion for The Challengers

WQAD's newspaper ad for The Challengers 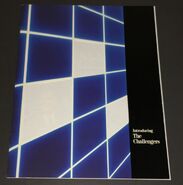 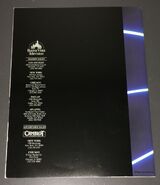 There were two pilots? 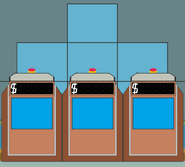 Ron Greenberg - based off of his previous show, The Who What or Where Game.

"All News and Current Events questions are verified by Newsweek Magazine." - Don Morrow