The topic of this page has a Wikia of its own: The Chase wikia.

The Chase is a game show based on the British format of the same name. Contestants compete against geniuses called "Chasers," for a chance to win hundreds of thousands of dollars. This is not to be confused with Chase.

A team of three contestants attempted to amass as much money as possible to put into a team bank by answering general knowledge questions. The money earned would go into the bank, but there was one person standing in their way: a quiz genius known as The Chaser. The Chaser's job was to catch each contestant and make sure the players were not able to put the money in the bank which the team had to collectively play for in "The Final Chase."

To begin, each player came up one at a time and played a game called "Cash Builder." In this game, each was given one minute to answer as many questions as possible with each correct answer worth a specific amount. The more correct answers given, the more money the players could add into the bank.

After the minute was up, the player's money was placed three steps down on an eight-step money board. The player could remain at this step and play for the money they had won, but if they so wished, they could be placed one step lower down the board for a smaller award, or one step further up the board for a greater award, with each award's value being set by The Chaser. The lower award could occasionally be a negative amount of money.

Once the player nominated their starting position, they had to answer questions correctly in order to reach the bottom of the board and bank their money. Both the player and The Chaser were given the same multiple choice question with three possible answers, then had to secretly press one of the three buttons on their keypad to lock in their answer. If the player and/or The Chaser was correct, they (both) moved one step down the board, but if wrong (or if one of them failed to lock their answer before time expired, which rarely happened), s/he/they had to remain where they are. The Chaser's job was to catch up to the player and eliminate them from the game by capitalizing on the mistakes the player made before they could reach the bottom of the board. If this happened, the player was out of the game and the cash disappeared by the red arrow, and as the saying went, the chase was over (same as "game over" in some games). This was repeated for all three players.

The players who successfully outran The Chaser proceeded to The Final Chase. If all three players were caught, then the team had to nominate one player to proceed to what was called a "Consolation Chase." If the Chaser lost, they each won the value of one Cash Builder question in the GSN version. In the ABC version, the consolation amount was decided upon by the Chaser.

In the final round, all or the remaining players answered as many quick-fire questions as possible in two minutes to amass as many spaces as possible. The more questions answered correctly, the more the players increased their chances to avoid being caught. To start, they were given one space per remaining member of the team, up to three potential spaces (or four on the UK version).

If all three players were caught in the head-to-head rounds, the team would have their best player play a single-player Final Chase for a consolation prize that would be split evenly among the three contestants. The official name is Consolation Chase, but it is widely known as a Lazarus Chase throughout the community. On the GSN version, the team would be given a one-step head start, as if it was a normal single-player Final Chase. In the first season of the ABC revival, no head start would be given, but this was reversed at the start of Season 3.

To answer a question, the player had to press his/her own buzzer and only s/he could answer it. Upon buzzing in, an off-stage voice would say that person's name. But sometimes if the contestant was right and at the same time the other contestant pressed the button, it was counted as a wrong person answer, and they couldn't accept. Players were not allowed to confer or discuss questions in this stage. In the event there was only one player in the Final Chase, that player was not required to press the buzzer.

The Chaser was then given a further two minutes of different quick-fire questions to attempt to catch the team, just like the red arrow from the eight-step money board. If The Chaser got any question wrong or couldn't answer it, the clock stops and the question is thrown over to the players to confer. If they got the answer correct, The Chaser was pushed back one step and the clock was resumed. If the players answered The Chaser's question correctly while The Chaser was on zero steps, an extra step was added to the players' total. If The Chaser succeeded in catching the team, the team would leave with nothing, and again, the team's money will go down from The Chaser, and the chase was over, however, if the team was not caught by The Chaser when time was up, the prize pot was split equally between the remaining team players. Should only one player make it to the Final Chase and win, then that player would get the full amount. If the Chaser succeeded in the Consolation Chase, they would be allowed to split the consolation prize with their teammates.

The Chaser was "The Beast" Mark Labbett, also a Chaser on the original British version. Each correct answer in the Cash Builder round was worth $5,000. Celebrity players had an extra $5,000 added on before the Cash Builder started, supposedly for charity.

If facing a player that he did not want to play again in the Final Chase, usually those who got 10 or 11 questions right in their Cash Builder, The Beast would activate a “Super Offer”. This super offer had the potential for much higher winnings, usually in the $150,000 to $250,000 range. The offer is displayed as golden with black lettering, and the red lights around the set turn gold as well. The catch is that accepting the Super Offer would put the player just one step ahead of The Beast, so if the player got the first question wrong and The Beast got it right, the player would be immediately caught.

The Chasers are "The Buzzsaw" Brad Rutter, "The Professor" Ken Jennings, and "The High-Roller" James Holzhauer (plus "The Beast" Mark Labbett in Season 2 onwards). Each correct answer in the Cash Builder round is worth $25,000 in season one, and $10,000 in seasons two and on.

The first season of The Chase premiered new episodes Tuesday nights at 9:00 P.M., except for episode 2 which aired immediately after the premiere of episode 1 at 10:00 P.M.

The second season of The Chase premiered new episodes Tuesday nights at 8:00 P.M.

The third season of The Chase premiered new episodes Tuesday nights at 8:00 P.M.

The fourth and final season of The Chase initially premiered new episodes Tuesday nights at 8:00 P.M.

A single mobile game was released for the iPhone and iPad by GSN in 2013. 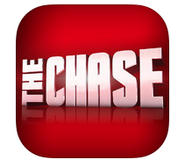 On March 24, 2021, the writers of the ABC version of The Chase went on strikes because producer ITV America has refused to abide by some of the terms of the collective bargaining agreement that covers the show. In a statement, ITV America countered that "We began good faith negotiations and proposed a package for the writers that includes generous, over scale pay increases and health benefits through the WGA."[1]

On April 5, 2021, both ITV and WGA[2]settled an agreement by reaching a deal to end two-week strike.