The Cougar was a short-lived reality dating series where it features a 40-year-old woman named Stacey Anderson choosing a boyfriend from a group of twenty younger men.

Over eight weekly hour-long episodes, the young men (all in their 20s) competed for a chance to have a long-term relationship with Stacey Anderson, a 40-year-old real estate agent and divorced mother of four from Arizona. The show is very similar to The Bachelorette, except that instead of a rose to determine who stays and who goes, the Cougar (Anderson) uses the "Kiss Off". During the "Kiss Off", each contestant gives the Cougar a kiss and if she kisses on the lips, the contestant stays. However, if she gives her cheek, then the contestant is out. 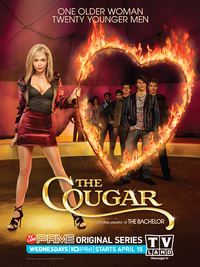