SPARKS-ERA OPENING:
"It's the first word in television game shows, The All-New Crosswits! Today's special guest stars: (insert celebrity guests). Today, one of our contestants can win one of these three fabulous cars, and a vacation of a lifetime to (insert destination), on The All-New Crosswits! Here to help us figure it all out is our host, David Sparks!"

The Cross-Wits (also formerly known as The All-New Crosswits) featured two contestants with the help of their two celebrity partners playing crosswords for cash & prizes.

Two teams of three (consisting of two celebrities & one contestant), competed in a game of solving crossword puzzles in which the words in the puzzle were clues to a person, place or thing.

To start, the subject of the master puzzle was given in each round. The contestant in control choose which position in the puzzle to play. Then the host would announce the clue to that hidden word, and the celebrity would have seven seconds to guess it. If the celebrity's time was up, then the contestant captain had to then rescue the team by answering the same clue; a miss from the captain meant they lost control of the puzzle. Each time the team in control guessed the word correctly, the team would earn points times the number of letters in the answer, and kept control.

If at anytime the contestant knew the solution to the master puzzle, he/she could choose to solve it. Solving the master puzzle earned bonus points (ten times the letter value), and won the round. The team with the most points after three puzzles or when time was called won the game, and moved on to the Crossfire round.

In the 1970s version with Jack Clark since this was taped before the era of advanced computerized graphics, the game board was manually-operated. The game board was a 10×10 grid (save for the bottom two where the timer was located). It had light boxes that displayed the letters. Since the numbers were too small for the viewers to see, the positions were pointed out by the show's hostess Jerri Fiala with the use of a pointer (similar to what a teacher used in school at the time). The board also had a special box which housed the puzzle's solution and black cards to cover up the solution. When the puzzle was solved, Jerri peeled it off to reveal the right solution.

On a player's first turn at a puzzle after choosing which position in the puzzle to solve, he/she also chose which star partner to guess it first. After that the celebrities took turns.

In all rounds each correct answer was worth 10 points a letter (ex. the word "scientist" is nine letters long, so this word would be worth 90 points), and solving the puzzle was worth 100 points more.

In subsequent seasons, contestants also won a prize for solving the puzzle, and solving the puzzle on the first clue (first two rounds during Seasons 2–4, only Round 2 for the final season) won a new car. The subject of the master puzzle was not revealed at the time and required the use of a special triple question mark card to hide the subject.

When solving the master puzzle, the team in control was allowed to first take a seven second conference before the contestant could guess (no conference, but five seconds of thinking time for the contestant, if a car was involved).

Should time run out in the middle of a puzzle, only the team controlling the chosen clue at that time could answer the clue and solve the puzzle for another prize regardless if s/he could win or not.

In the intro, the celebrities' names were displayed on the board.

In the first season, there would be a close-up of the chosen word.

Carolyn Jones agonizing over a clue (3 Down).

The puzzle is solved.

The playing area from a later season.

The playing area from the final season.

Unlike the 1975 version, this version's game board was completely computer generated, and therefore required no model to point out the letters. The puzzles & current scores were shown on an off-camera, off-stage TV monitor.

There was also a "Mystery Word" in one round; and correctly guessing that word won a prize in addition to the points.

Crossfire Round (Bonus Round)[]

In the Crossfire round, the winning contestant & the celebrity of his/her choosing had 60 seconds to solve 10 clues. None of the words in the Crossfire puzzle were clues to a master puzzle. Solving less than 10 clues won modest prizes, but solving all 10 won a grand prize.

In this Crossfire round, the winning contestant had a choice of one of the two celebrities he/she was partnered with to play the round. The more words guessed, the bigger the prize, and completing the entire Cross-Fire puzzle won a big trip.

Will Nipsey Russell and his contestant partner solve the last word in time?

Here's a Crossfire win, but without the shot of the winning team.

In the Car Round, the three remaining celebrities each held a box containing the names of three cars, one in each box. The winning contestant selected which car to play for, then chose the celebrity he/she thought had that chosen car. If the player was right, the car was his/hers. The trip was not at risk, win or lose. For a time, all four celebrities played the car round, and a corresponding fourth box was added to the mix; if chosen, it was worth $1,000 to the contestant.

For the first two taped episodes, the car round was staged differently: rather than holding boxes containing the names of the three cars offered, the celebrities held the keys to each of the three cars. After choosing a celebrity, that celebrity attempted to open the chosen car with his/her key. 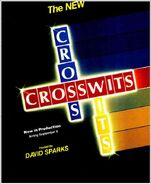 In the United Kingdom, Crosswits ran on ITV from 1985 to 1998, originally hosted by Barry Cryer followed by Tom O'Connor later in its run. Each contestant would be teamed with one celebrity and each letter was worth a point and solving the main solution scored 10 points. The highest scoring player played the 60-second Crossfire puzzle for a holiday.

“In some cases, today’s contestants have agreed to prize substitutions and may not receive the exact prizes announced as won on this program.” - Michelle Roth (from the first two taped episodes in 1986)

Before he hosted The All-New Crosswits, David Sparks hosted an unsold 1986 pilot called On a Roll.

Two episodes of the Sparks version (featuring Rosie O'Donnell and Arsenio Hall respectively) were aired by GSN on October 26, 2014.

Unlike most other shows, the credits on the 1970s version were seen at the beginning rather than the end, after the celebrities were introduced, but before Jack Clark was introduced.

Current crossword game show People Puzzler follows the same scoring format as The Cross-Wits, except with a 100 point bonus for three consecutive correct words replacing the 100 points for solving the master puzzle. In addition, the 2-player Head to Head Showdown plays similar to the Crossfire round.

Clips of an episode of The Cross-Wits