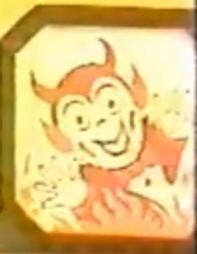 The Devil (not to be confused with the Devil from The Joker's Wild and Joker Joker Joker) is the main antagonist in the game show Second Chance. Similar to the Whammy, if landed on, all money the player accumulates is lost. However, the player's scoreboard would be turned off and a “waa-waa" sound was heard. Also in the pilot, the devil would appear in lights (flip cards in the series). Should one unlucky player hit four devils, a different sound ("waaaaaaaaaaa-waa-waa-waa-waaaaaaa") was played.

Retrieved from "https://gameshows.fandom.com/wiki/The_Devil_(Second_Chance)?oldid=151724"
Community content is available under CC-BY-SA unless otherwise noted.