The Gong Show is the talent game show with mostly the worst acts imaginable, and a panel of three celebrity judges (four in the original pilot) lets them know by giving them the "gong". This was also known as Extreme Gong and later as The Gong Show with Dave Attell.

Contestants appeared on The Gong Show to perform in many ways imaginable. They could sing, dance, do stand-up comedy, make magic, perform a movie scene, you name it, they do it. On each act, if one, two or all three celebrity judges thought if the current act was not worthy of continuing any longer, all they had to do is hit the Gong behind them, thus eliminating that act from competition. For each act that did not get gonged, the judges would each give a score to those acts on a scale of 0 to 10 (10 being the best, zero being the worst) for a maximum total of 30 (which has happened on many occasions). The act with the highest score received a Gong Show trophy, and a check with a ridiculously low amount. In case of a tie, the audience chose the winner by applause. Later, it was the producers' decision and (later) the judges'.

This act was so bad that Jo Anne Worley, Bobby Van and Joyce Bulifant all hit the gong at the same time!

The amount varied from version to version:

The show had many running gags and characters who appeared as regular performers.

The show's air of spontaneity was abetted by various comic appearances by supporting staff members.

The Gong Show was infamous for a few acts that, by contemporary 1970s standards, were controversial. The most notorious of these was an act called "Have You Got a Nickel?" (also known as "The Popsicle Twins"), which consisted of two 17-year-old girls in cutoff shorts, sitting crosslegged on stage and provocatively sucking and licking Popsicles, all without musical accompaniment. The non-act divided the judges; Phyllis Diller gave the act a zero and Jamie Farr gave the act a two, but Jaye P. Morgan awarded the pair a perfect 10, quipping, "You know that that's the way I started." (The Gong Show Movie includes 10 seconds of footage from the Popsicle Twins; the segment is also seen in Confessions of a Dangerous Mind).

Years later, Barris told an interviewer that the censors would regularly reject acts that he thought were safe enough to air. So, he made it a point to submit acts to the censors that were totally over the line, in the hope that some of the less questionable ones would slip through. The Popsicle Twins' act was, in Barris's mind, far too suggestive, and he'd submitted it as a stalking horse. Correcting the commonly-held belief that the women were merely portraying minors, Barris revealed that the girls were just 17 years old at the time. He said that the usually diligent censors were asleep at the wheel during pre-screening and the act was allowed to go on in the Eastern and Central time zones before they realized what was going on, but the network did censor the telecast for the Mountain and Pacific time zones.

Another impromptu moment came in early 1978, when Jaye P. Morgan unbuttoned her blouse and exposed her breasts during a female contestant's performance. While this was not Morgan's first "flashing" incident, it was the last straw for NBC, who promptly dropped her from the show for the remainder of its daytime run (though she would continue to appear as a regular on the nighttime syndicated version). Morgan often inserted risqué material into the programs, such as during a performance by Chuck D'Imperio, "The Shower Singer". D'Imperio sang "Bad, Bad Leroy Brown" while naked in a shower, inspiring judges Morgan, Jamie Farr and Arte Johnson to do a rousing dance around the shower stall at center stage. Morgan poked her head inside the shower, and later commented, "I didn't care too much for his singing, but I'll give him a big 10 for what I saw in the shower!"

Extreme Gong was also infamous for two impromptu incidents, including one with a talking dog named Cody who tried to say things like "I love you" and "ice cream" but did not succeed in saying these, and another featuring "The Village Little People" that performed a cover of "YMCA".

The two biggest Gong Show-related show-biz successes were Andrea McArdle and Cheryl Lynn. Twelve-year-old McArdle appeared on an early show in 1976, shortly before winning the lead role in the hit Broadway musical Annie. Lynn was signed to a recording contract as a result of her performance, and recorded the Top 40 disco hit "Got to Be Real."

This version was produced by Avoca Productions, Inc. and was supposed to be hosted by Chuck Booms[1]and was taped on October 22, 1995 (according to the shows' ticket seen above here) at the time, which was going to be paired up with Planet Hollywood Squares for syndication but both of them were held off until 1997 just to see if their revivals of The Dating Game and The Newlywed Game (both are created by the late Chuck Barris) were working out.

A version was taped in 2000 for late night syndication, hosted by Tom Arnold, with a feature being him going to people's houses to see their talents.

In 2003, another version was going to be made for the now-defunct television network The WB[2](now merged with another defunct network UPN [United Paramount Network] in order to form The CW) and would be produced by Sony Pictures Television and Michael Davies' Company Diplomatic Productions (now Embassy Row). In the same year, it was announced that this version was going to be hosted by comedian and Comedy Central roast master Jeffrey Ross[3][4]; sadly, this also didn't work out. 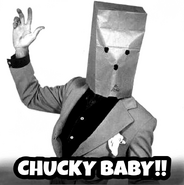 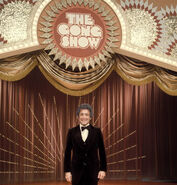 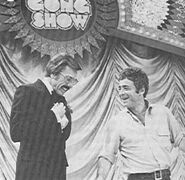 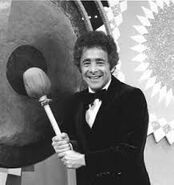 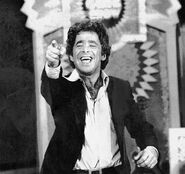 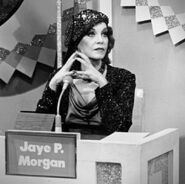 A board game based on the show was made by American Publishing Corp. in 1977.

A book based on the show was authored by Jerry G. Bowles, published by Grosset & Dunlap and distributed by Ace Books in 1977.

A set of Trading Cards based on the original 70's version was released by Fleer in 1977.

A Chuck Barris Gong Show costume was released by TV Comics in 1978.

This special aired only once in primetime on NBC on April 26, 1977.

The original Gong Show was later made into a movie (appropriately titled The Gong Show Movie) in 1980. The film bombed and was never released on home media until March 29, 2016, though it has been shown on television.

In 2003, the E! Network did an hour-long documentary on The Gong Show as one of their True Hollywood Stories.
This was the second primetime game show on ABC hosted by a fictional character, the first was the short-lived You Don't Know Jack hosted by Troy Stevens (played by Paul Reubens) in 2001.