PILOT OPENING SPIEL: "The excitement at the movies, the glamour of the stars! Get ready to test your knowledge of the movies on The Hollywood Game, starring PETER ALLEN!"

SERIES OPENING SPIEL: "The fun at the movies, the excitement of TV! Get ready to test your knowledge of entertainment on The Hollywood Game, starring BOB GOEN!"

The Hollywood Game was a short-lived CBS summer primetime game show where contestants were tested of their knowledge of entertainment. In the pilot, the show only focused on movies; when it became a series, it also focused on other forms of entertainment.

In the first three rounds, each team chose one of nine entertainment categories represented by the nine letters in "Hollywood", "H-O-L-L-Y-W-O-O-D". On the pilot episode, each team chose a category by hitting their buzzer to stop a randomizer; while in the series, the teams chose the categories verbally. The earlier explains why the podiums in the series had buzzers but the aired format never called for them. After choosing a category, the host asked questions under that category. Each question was accompanied by a TV/film clip or a picture. A correct answer won money for that question. Missing the question gave the opposing team the chance to "steal" the question and the money.

Each team was asked two questions worth $100 and $200, respectively.

The Double Feature Round[]

Double Feature was played similar to the Final Jeopardy! round on Jeopardy! Each team could wager all, half, or none of their current score on one more question in a predetermined category. Afterwards, the teams were shown two film clips from the same category, then were asked a question related to both clips. The teams then had 20 seconds to write down their answers. A correct answer added the wager, but an incorrect answer deducted the wager. The team with the most money at the end of the round won the game.

Both teams kept their money, but the winning team proceeded to the bonus round called Fast Picture for a possible $25,000 (in the pilot it was called Fast Film).

The Fast Picture Round[]

In the bonus round, players on the winning team played individually. They had 30 seconds (15 seconds for each player) to identify nine pictures in a particular category (Ex: "Child Stars" or "Animated Films"). Each picture was shown one at a time. Once a player got a picture right or passed on it, he/she moved on to the next one. When time was up for the first player, the other player tried to get the rest, starting with the pictures the first player didn't get to, followed by the ones the first player missed. Each correct answer lit up a letter in the Hollywood Sign in white and earned the team $1,000 (passing on a picture turned a letter blue), and getting all nine right (lighting up the entire Hollywood sign) won $25,000. The maximum possible win on the show (including "stolen" money) was $45,600. 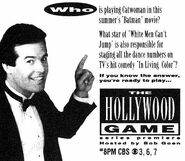 Peter Allen hosted the pilot, but was too ill to host the rest of the series. He died the day before the premiere.

Six episodes were taped, but only four of them aired.

This was the first game show announced by John Cramer.

The pilot used eggcrate displays for the scores, but the series switched it to a 7-segment Vane display, similar to what The Quiz Kids Challenge and Hollywood Squares (from 1998 to 2002) would use.

Props from the show, such as The Hollywood Sign and the neon palm trees, would be reused on Wheel of Fortune in their inaugural “Wheel Goes to The Movies” Week during Season 15 in May of 1998.