1981 SPIEL:
"In every civilization, Man has searched for the ultimate combination of intelligence and physical ability, in one super being. Tonight, you'll witness this unique search. This is the challenge of The Krypton Factor. (insert contestant's name and description 4x). These four people will face each other in the challenge of The Krypton Factor. Now, Dick Clark!"

The Krypton Factor was a tournament-type game show based on the UK series of the same name where four contestants were being tested on their mental ability and physical skill, all while trying to score points (aka The Krypton Factor).

Four contestants were tested on their mental ability and physical skill.

Sixteen contestants competed in this five-week series, with four contestants competing in each of the first four matches. In this adaptation, a player's score was called a Krypton Factor, as was the case on the original UK version.

Each player took turns playing a video game challenge where either a certain score had to be achieved within a certain time limit or the player had to stay in play for a certain amount of time. Each successful player scored five points. The games used in this round were adaptations of early Atari 2600 cartridges, such as Dodge 'Em, Outlaw, and Space Invaders; each episode featured a different game challenge.

In this round, each contestant wore headphones so only they could hear their questions which were posed by announcer John Harlan. Each player in-turn was given two mental agility tests, each of which required them to mentally manipulate a series of letters, numbers, or words in a specific way. The first test had five parts and was for four points, and the second test had six parts and was worth six points.

Only the home viewers could see the answers, while the audience in the studio couldn't and had to remain silent, according to Clark. The first sequence, consisting of five items, was worth four points, and the second sequence, containing six items, was worth six points. If anytime any player made a mistake, they had to sit out the rest of the round. A possible total of 10 points can be earned in this phase.

This round featured an obstacle course run that was pretaped in advance. Unlike the UK version, the course was designed to be fair to both men and women, so neither sex or age received a head start. The race began with a death slide into an inflatable mat, then players had to cross a pontoon bridge, crawl through tubes, drive a motor vehicle, ride a swing in order to kick down a door, and complete the course by walking in an inflatable wheel. The contestants earned points according to how they finished.

Scoring was as follows:

In the fourth round, the players were tested on memory. They were shown a scene from a current motion picture, and each player was asked a four-point question pertaining to visual or verbal detail with two possible answers and a six-point question requiring them to recall specific dialogue.

Then all players were shown a lineup of six similar-looking actors, one of whom had a key part in the film clip. Each player separately locked in their guess as to the correct actor, and each player who identified the correct actor earned ten points. A possible total of 20 points could be earned in this phase.

The player with the most points at the end of the competition won $5,000, plus an invitation to the final week to compete against the other weekly winners for $50,000.

The show advertised that the prize would be in gold, but the series winner was given the option of taking the $50,000 prize in gold or in cash, and chose the cash. The series' winner was Joey Helman, an attorney from Los Angeles. He and the first runner-up, Joel Lewin, a physical fitness consultant from San Leandro, California, competed on The Krypton Factor International, a special edition of the original British version airing December 30, 1981, against the 1981 UK champion, John McAllister, and first runner-up, Peter Rimmer. This special was to be filmed on the U.S. set, but instead filmed on the original Manchester set since the U.S. set had been torn down. Rimmer won the International special.

When the show returned, the show stayed the same except there were four rounds and the contestants were now teenagers. Two girls and two boys competed in each episode.

The set used in this version was similar to that of the original UK version. The difference is that the scoreboards used eggcrate numbers rather than vane numbers.

Each player in was shown a picture pertaining to a specific category, and had ten seconds to identify the subject of the picture for ten points. Afterward, three toss-up questions were asked pertaining to the set of four pictures, and all players used the buttons on their chairs to buzz in, but only the first player to do so could answer. A correct answer was worth five points, but an incorrect answer cost a player two points. Two sets of pictures were played in this manner.

This round was played like Round 4 in the original version; for this was where players were tested on memory. The players were shown a scene from a public domain film or cartoon, and they were each asked two questions about it, which could be either visual or verbal information, in turn in reverse order. Each correct answer was worth 10 points. There was also a bonus round in which the players were directed to the Krypton Cart, which concealed an object seen or mentioned in the film. The players were given five clues to its identity, and had to jump in to answer. A correct answer was worth 10 points but each player could only jump in once during the bonus round.

Like in the ABC version, this round featured an obstacle course run that was pretaped in advance. This course took place in Palos Verdes and began with a death slide, followed by a bicycle race, a rope swing, and ended with the Krypton Pavilion, which was a series of skill and agility tests. Scoring remained the same as the original version.

In most cases, only the first-place finisher was seen crossing the finish line.

The final round was played like the original: the contestants were asked a series of general knowledge questions, with each answer leading to the next question, except the round now lasted for two minutes (2:00) and most questions were multiple-choice. Also, the contestants played on podiums at center stage instead of with the buzzers on their chairs; plus, the front displays had room for three digit scores should any contestant have them. Each correct answer was worth five points, but each incorrect answer lost two points. 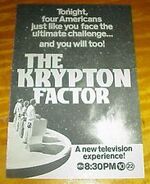 Based on the British show of the same name by Jeremy Fox.