(shots of the set & pinball machine) "And now, here's the man who runs The Magnificent Marble Machine, Art James!"

The Magnificent Marble Machine was a short-lived game show with a giant pinball machine.

Two contestants (one a returning champion) competed, each paired with a celebrity partner.

In the first half of the game, the teams answered general knowledge questions, frequently involving puns or other wordplay, which were displayed on a huge electronic marquee. First, the players were shown blanks on the bottom line, denoting the number of words and letters in the answer; then a clue would crawl across the upper line. If no team buzzed in once the clue was revealed, letters of the answer then filled in left to right as time progressed.

For any given question, only the contestant or the celebrity would be eligible to buzz in (the buzzer was a pinball); this alternated with each question, and was indicated by lighted panels in front of the eligible player.

Correct answers were worth one point, and five points allowed the winning team to take on The Magnificent Marble Machine.

The massive set, dominated by the gigantic pinball machine.

A look at the electronic marquee in action.

An instance where the letters are filled in one-by-one, in the event when no one knows the answer immediately.

Notice the yellow lights on the podiums. They signal which person, the contestant or the celebrity, is allowed to ring in.

The winning team got the chance to play a giant pinball machine (20 feet high and 12 feet long, located in the middle of the set), The Magnificent Marble Machine, being allowed to play it twice.

Each team member manipulated one flipper button (each controlling two flippers), and it was the team's goal to keep the ball in play for as long as possible within a 60-second time limit while accumulating points by hitting bumpers, noisemakers and lights. Hitting one of seven of the large numbered bumpers won the contestant prizes; hitting bumpers numbered 2 and 3 in combination won a larger announced prize (such as a car or trip). Play ended if it fell into one of the two "out holes" (one located below the main flippers, the other in the middle of the playing field). The flippers were disabled when 60 seconds expired, with the ball (still in play) usually entering an out hole within a few seconds.

At some point during the series, a bonus prize was added for hitting all seven numbered bumpers at least once. In the original format, each bumper scored 500 points while any noisemaker scored 200 points. Producers audited the score by watching the tape to ensure that each scoring feature had registered. Apparently, as the machine aged (week by week), scoring errors increased, so the producers changed the rules to have any of the seven "thumper bumpers" counting 500 points, with nothing else scoring.

While the ball was in play, a music cue would play in the background entitled "The Marble Rolls" by Mort Garson, who wrote all of the music for this series.

If a team reached a target score after playing two balls (15,000 for each new champion, minus 1,000 for each return visit), the team played a bonus "gold money ball", where the player earned $200 for each noisemaker and bumper. As the target was lowered from game to game, the money ball round became easier to reach. Later the goal started at 13,000 points with the Money Ball scoring $500 for each bumper hit.

At some point in the series' run, the "gold money ball" was redesigned to be a multi-player "money ball marathon" rather than a bonus round any player might be able to achieve in any one play of the machine. The contestant achieving the top point score over a two-week period would be awarded a money ball round. This format lasted for five marathons (ten weeks), after which, the money ball was dropped from the game altogether.

After the money ball round was removed, the electronic point counters on the pinball machine were covered over. Contestants then only played for prizes obtained by hitting the seven bumpers.

Roddy McDowall and his contestant partner Gary working the machine.

Gary managed to win every single prize on the pinball machine.

It's the Gold Money Ball, presented by Art James.

When the show returned on January 19, 1976 after a two week hiatus, gameplay changed to feature two teams of two celebrities each playing the front game. The winning team headed to the machine. One celebrity drew a name from the drum (filled out by the studio audience) and the lucky person played the bonus round with each celebrity.

Debuting on the Monday following the cancellation of host James' Blank Check (swapping places with Jackpot on the lineup), The Magnificent Marble Machine was one of the most hyped game shows on NBC's daytime schedule in the 1970s, as programmers were hoping to cash in on the current pinball craze.

However, critics and viewers roundly panned the show; soap operas on CBS and the game Showoffs and the soap All My Children on ABC easily defeated The Magnificent Marble Machine in the ratings.

The series began at 12:00 Noon (11:00 AM Central), then moved to 12:30 PM on December 1; as with James' previous Blank Check, this required the program to end five minutes before the half-hour in order to accommodate an NBC News newscast anchored by Edwin Newman.

On January 5, 1976 the show was briefly pulled off the schedule in order to retool and to give an experimental talk show hosted by KNBC-TV reporter Kelly Lange, Take My Advice, air time without a standard full-fledged 13-week commitment. The Magnificent Marble Machine returned on January 19, the same day NBC's own Wheel Of Fortune returned to its half-hour format.

When the series returned, however, it had modified the rules and changed the format - now, only celebrities played the game, with guests playing for home audience members and a studio audience member playing the bonus round. A similar all-celebrity format had been tried on ABC's Password a year earlier; however, Goodson-Todman quickly went into a big-money civilian format once the tournament ended (however, that did not save the show). Marble's "retooling" was subsequently and all-around critically panned.

Although the last original episode aired on March 12, 1976, NBC aired reruns until June 11 because of a technical strike affecting the network; this marked one of the first instances of a network employing repeats of a first-run game show to fill a time slot. The network canceled the program when its replacement, The Fun Factory, was ready. 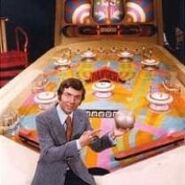 In the 1979 thriller film The China Syndrome an episode of The Magnificent Marble Machine is being shown on a television monitor in the master control room of a local tv station KXLA showing the late Joan Rivers as a celebrity guests working the machine.

MMM and the short-lived 1967 ABC game show Temptation (coincidentally hosted by James also) were the only two game shows packaged by Heatter-Quigley to not use Kenny Williams as announcer. Because Williams was so busy at the time on the other H-Q shows (between High Rollers, Hollywood Squares, and Gambit totaling some 17 half-hours per week on networks and in syndication), Johnny Gilbert (best known today as the long-standing voice of Jeopardy!) worked MMM instead. Williams did announce the pilot, but he was replaced at the last minute when it came to series.

Game show hosts Peter Marshall, Alex Trebek, Jim McKrell, and Chuck Woolery appeared as celebrity players during the program's tenure. (Of the four, only Marshall and Trebek hosted shows for HQ that made it to air.)

On the same day, The Magnificent Marble Machine aired on NBC, and both Rhyme and Reason and You Don't Say! aired on ABC.

Nearly all of the run was erased due to not only NBC's standard wiping practice in the 70s, but also because videotape was very expensive. NBC would re-use its tapes for other programming. Three episodes of this show are known to exist: Episode #4 is held in varied quality among private collectors, the first All-Star episode from February 17, 1976 exists at UCLA Film & Television Archive and the All-Star episode from March 1976 exists at The Paley Center for Media.