The Mole was an American reality game show that aired on ABC. It was based on De Mole franchise of programs that have aired in numerous countries originally from Belgian origins. The Mole was produced by Stone Stanley Entertainment for its first four seasons. It was cancelled but was later picked up again after a four year hiatus. The fifth season was produced by Stone & Co. Entertainment.

The series was a reality competition in which the contestants would work as a group to add money to a pot that only one of them would win. Among the contestants was one person who was designated "the Mole" by the producers and was tasked with sabotaging the group's money-making efforts. At the end of the episode, the contestants took a quiz based on the events of the round. Based on their answers, the lowest scoring contestant (as indicated by the green or red thumbprint display on the screen) was eliminated from the game. The Mole was also one of the longest-running game shows on ABC behind Who Wants to Be a Millionaire?.

Countries that have done their own versions of The Mole include:

Based on the Belgian show De Mol 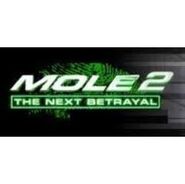