The Moment of Truth

WALBERG: "Tonight, in this chair, the only thing that separates a person from $500,000 is twenty-one questions, and their ability to answer each one of these questions with the truth, the whole truth, and nothing but the truth. Is there an honest person left in America? Time to come to face (Echo) THE MOMENT OF TRUTH!"

The Moment of Truth was a short-lived American adaptation of the Colombian game show called Nada más que la verdad (Nothing But the Truth) where it featured contestants who were willing to tell the truth about their dark secrets (thus destroying their reputation) to win up to half a million dollars.

Prior to the show, a contestant was administered a polygraph exam and asked 100 questions (50 questions in Season 1)—many of which were asked again in front of the studio audience during the actual taping of the program. Without knowing the results of the polygraph, they were asked 21 of those same questions again on the program, each becoming progressively more personal in nature. If the contestant answered according to the polygraph results, they would move on to the next question; however, if they lied in their answer (as determined by the polygraph) or simply refused to answer a question after it had been asked, the game would end. Each time they answered a certain number of questions truthfully, they won increasing amounts of money as follows:

If they gave a false answer before the $25,000 level of questions, they would leave with nothing; after the $25,000 level, if a false answer was given, the contestant left with $25,000 (during the first season, a false answer on any level caused the player to leave with nothing). The contestant could stop at any time before any question was asked and collect their earnings, but once they herd a question, they had to answer it or lose the game. Answering all 21 questions truthfully, as determined by the polygraph results, won the jackpot of $500,000.

The questions varied, increasing in difficulty and degree of personal nature of the questions. Sometimes, a "surprise guest" (such as an ex-partner or a good friend) would come on the stage and ask a particularly difficult question. Friends, colleagues, and family of the contestant (who were gathered near the player) had access to a button which could be used to switch out a question once per game if they felt that the nature of the question was too personal, an option which was introduced to them after the third question.

Though no contestant on the shows aired by FOX answered all 21 questions in concert with the polygraph results, according to Mike Darnell, president of alternative entertainment at FOX, "In the vast majority of contestants, 99%, you get, 'Hmm, I was a little worried when I answered that question.'" The series required contestants to sign an agreement that they would accept the conclusions drawn by the polygraph examiner.

However, one contestant in the unaired second season (S02E09) did answer all 21 questions truthfully to win the top prize. The contestant was Melanie Williams, a member of a secretive polygamist group. Most of the questions centered around the secrets of polygamy and what took place in the group in which Williams was a member. For $500,000, Williams' final question was whether she believed her father had sexual relations as an adult with a minor. She said she felt he did, and the lie detector determined her truthful for the grand prize.

The first episode was the lead out after the highly rated American Idol, and managed to rate very well itself with 23 million viewers, the highest rating for a premiere to that point in 2008.

In one episode, over the course of play, a female contestant admitted that she felt that her ex-boyfriend is the man she should be married to and to having cheated on her husband. The intro of the show featured a disclaimer by Walberg in which he claimed it was highly debated whether or not the episode should even be aired and he was against it being aired, calling it the most uncomfortable situation he has ever been in on television.

A 2008 episode (originally April 19, 2008) of the sketch-comedy show MAD tv once spoofed the show with Connie Chung (played by Bobby Lee) as the contestant and husband Maury Povich (Played by Michael McDonald [the actor not the singer with the same name]) as her family member. Dan Oster plays host Mark L. Walberg in the skit. 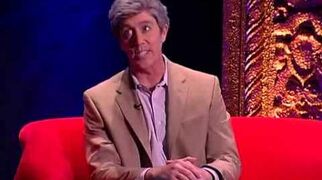 NOTE: The announcer was voiced by Nicole Parker.

A 2008 episode (originally December 7, 2008) of Robot Chicken called "Help Me" briefly once spoofed the show as part of "Just the Good Parts".

In a 2009 episode of Medium (originally March 30, 2009) ironically enough called Truth Be Told the show of the same name is a spoof of The Moment of Truth.

A board game was released by Selchow & Righter/Hasbro in 2008. 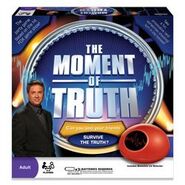 A card game and included a "Lie-Detector" version were released by Cardinal in 2008.

Countries that have done their versions of The Moment of Truth include:

NOTE: The Hong Kong version was cancelled before it even aired.

Based on the Colombian game show Nada más que la verdad (Nothing but the Truth) by Howard Schultz.