The Newlywed Game is the hilarious, long-running game show where unpredictable recently married couples (newlyweds) spill their guts (talk about themselves) in order to win a grand prize or a second honeymoon.

Four newlyweds (sometimes three) all of whom were married under two years competed each day, and the game was played in two rounds. In each round, one member of each couple (all of the same sex) was isolated while the other members were asked questions about themselves, their hobbies, likes, dislikes, what they do, what they don't do, and maybe reveal a dirty little secret at times. Many of the questions focused on having sex or as familiarly known as "makin' whoopee". When the isolated spouses returned, they were asked the same questions, and the answers given by the first set of spouses were written on blue cards (which were all placed flat on their laps or in front of them). Each time a couple matched their answers, they would earn points; but each time a couple didn't match, they scored no points and would usually argue over their answers.

The wives were secluded off-stage while the husbands predicted what their wives would say when they came back. Each match was worth 5 points. Three questions were asked in this round.

The husbands were secluded off-stage while the wives predicted what their husbands would say when they came back. Each match was worth 10 points. Three questions (later two) were asked this round, and after the second/third question, a bonus question was asked, and that question was worth 25 points. The maximum total score was 70 points (achieved on rare occasions). When the second round questions were reduced to two, the maximum total score was 60 points.

The couple with the most points won the game and from 1966 to 1989, they won a grand prize chosen just for them (in actuality, the couples had requested a certain prize and competed with other couples that had requested the same prize); starting in 1996, the grand prize was always a second honeymoon (a trip).

In 1988, the couples no longer played for points; they played for cash. In Round 1 each match was worth $25 (with that amount given at the start), and in Round 2 only two questions were asked with each question worth $50. The bonus question was a betting question, for they could risk any or all of their current money total. A match added the wager while a mismatch deducted the wager. The couple in the lead at the end of the game still won the grand prize, but any money that the other three couples won was theirs to keep.

When Paul Rodriguez took over as host in December of 1988, the old scoring format returned, but the number of couples was reduced to three.

When Gary Kroeger took over in Fall 1996 the show was overhauled with a new format.

Each spouse was shown a videotape of their mates who gave a statement (mostly about their spouse). The tape was paused near the end which gave the spouse in control a chance to predict how his/her mate completed the statement. Then the tape played again, and a correct answer earned 10 points. First the husbands' tapes were shown & the wives took a guess, and then it went the opposite direction.

Gary would read a series of questions to the wives who stood behind podiums and are equipped with buzzers. They could be anything like: "Your High School", "Your kid brother's name" or "Favorite TV Show". When a question was read, one of the wives would buzz-in and say "He'd better know that!" To prove it, the appropriate husband seated behind her stood up and answered the question. A correct answer scored five points but an incorrect answer lost five.

Host Kroeger asked the couples a multiple-choice question in which one half of the couples had given answers in advance, and the other had to guess what he/she chose. Each match again earned 10 points. First the wives predicted what their husbands said, and then the process was reversed.

In this round, before the show, either the wives or the husbands gave some very weird facts about themselves. Host Kroeger gave the facts to the other halves of the couples, who were equipped with heart-shaped signs that said "That's My Wife/Man!" If they recognized that fact, all they had to do was to raise the sign (which then lit up) and yell out "THAT'S MY WIFE/MAN!" If he/she was correct, the couple scored 10 points; if, however, he/she was wrong, the couple lost 10 points. Only the first person to raise the sign could win or lose. Seven facts were played.

In the final round of the game, host Kroeger read a series of two choices (ex: Candy or Potato Chips, Rocket Scientist or Space Cadet, Ketchup or Mustard, etc.) and the wives held cards with one of the choices on it. Then the husbands chose one of the two things that most applied to them. Each match scored points; they were seven questions and each question was worth 10 points more than the previous question with the last question worth even more as follows:

Thus, 310 points were possible for any couple who could answer all seven questions correctly in this round.

The couple with the most points won the game and the second honeymoon trip.

This format was mostly disliked by fans of the original show so the next year they switched it back to its original format and theme with original host Bob Eubanks back at the helm.

Before the Wilson/Shepherd revival in 2009. In 2008, according to The Hollywood Reporter[1]the network taped comediennes Kim Coles (who previously hosted Pay it Off for BET) and Judy Gold respectively to host reboots of this show along with its sister show The Dating Game. They would've incorporated modern elements like online dating sites. In addition, Michael Davies would have executive-produced both shows through his overall deals at Sony Pictures Television. However, this never came to fruition.

The most recent version with new host Carnie Wilson and sponsored by eHarmony.com was exactly the same as the classic format, except three couples played the game, and a new bonus game was added featuring couples from the previous versions (now dubbed "Goldyweds"). Other differences were that the wives predicted first, and the husbands predicted second. The final question of the game was dubbed the eHarmony.com Compatibility Dimension Question; however, it wasn't played on shows where the couples that day met through eHarmony.com.

Each round had three questions with the Round 1 questions worth 5 points, the first two questions in Round 2 were worth 10 points, and the final question was worth 20 points, for maximum total of 55 points (achieved on a few occasions).

The couple with the most points won the game, a second honeymoon, and the right to play the bonus round. The losing couples won consolation prizes.

In the bonus round, the winning "Newlyweds" competed against the "Goldyweds". To start, the wives were asked five questions during the final commercial break. When the break was done, the husbands were asked those same questions while standing in front of the stage with their wives sitting in chairs in back with cards on their laps. Each question was worth an increasing point value starting with 1 and ending with 5. The couple with the most points won a bonus prize.

If there was a tie at the end of the main game and/or bonus round, the classic Newlywed Game tie-breaker came into effect.

Though most of the format remained the same, there were a few changes to the show: 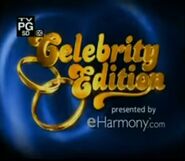 NOTE: Both of these have aired on Game Show Network (a.k.a GSN).

The Newlywed Game: A Silver Anniversary of Love and Laughter[]

On April 18, 1998; a special called The Newlywed Game: A Silver Anniversary of Love and Laughter hosted by Bob Eubanks and was announced by Gene Wood (although he was never credited in the end) where it looks back at some of the couples who have appeared as contestants during the 1960s, 70s & 80s incarnations of the franchise.

NOTE: This was also the name of the board game released by Endless Games in the same year as this special.

On October 28, 2018 an episode of the series Cover Story called Cover Story: The Newlywed Game – Most Outrageous Answers hosted by Trish Suhr features the most outrageous and hilarious moments from the show spanning over many seasons.

At the time of the GSN series, Carnie Wilson starred in her very own short-lived, six-episode-only reality show that aired on the same network as this version called Carnie Wilson: Unstapled in 2010. In addition, original host Bob Eubanks made an appearance in one episode of the show.

Reruns of the Shepherd version can also be seen on Bounce TV.

Despite what many people think, not all couples' marriages ended in divorce. Several Newlywed Game couples (even the ones who lost) continued being together after their tapings.

On April 16, 2021; according to Deadline, Sony is developing a new version of The Newlywed Game to ship out to the market.[2]

In October 2021, Buzzr announced classic episodes (mainly from the 90s) hosted by Eubanks would air starting November 15. This will be the first Sony-owned game show to air on Buzzr, as Game Show Network (a.k.a. GSN), which is owned by Sony, previously aired all of their game show owned properties.[3]

Countries that have done their own versions of The Newlywed Game include:

Here are some YouTube videos of one couple who played The Newlywed Game and lived together & stayed together to tell about it.