The Newlywed Game: A Silver Anniversary of Love and Laughter

"It's THE NEWLYWED GAME: A SILVER ANNIVERSAY OF LOVE AND LAUGHTER! And here's the star of The Newlywed Game, Booooooooob Eubanks!"

The Newlywed Game: A Silver Anniversary of Love and Laughter was a special where it looks back at some hilarious moments from the history of the show.

A look back at some hilarious moments from the history of the show. Host Eubanks is reunited with some of the couples who have appeared as contestants during the 1960s, the '70s & the '80s incarnations of the show.

Although you can hear Gene Wood in the intro, he was never credited in the end of the special. Additionally, this was the third (and final) time that both Wood and Eubanks have worked together on. Their first was Trivia Trap in 1984 and much later, the revival of Card Sharks in 1986.
Although this special came out in 1998, you can clearly see the 1997 copyright with Alta Productions. 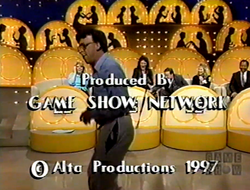 A promo for the special
Full Special