The Parent Game was the show where couples answered questions about parenting.

Host Race would ask three couples a series of multiple-choice questions about how to parent their children. Their job was to match answers with a resident child psychologist. Each time they did that, they earned points.

Each game consisted of five questions. On the first four questions, each player on each team answered individually. On the final question, all three couples had to agree and come up with a team answer.

Here's how the scoring worked:

The couple with the most points won the game and a grand prize. Should the game end in a tie, the tiebreaker rules used on The Newlywed Game came into effect. The closest guess won the grand prize. 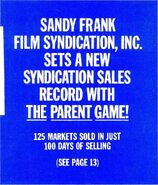 The Parent Game came back in 1996 on The Family Channel as Wait 'Til You Have Kids! with Tom Parks as host.

"Thank you for watching, and join us next time on The Parent Game, where we once again prove that it's not kids who say the darnedest things, it's their parents. Thank you, and good night!" - Clark Race