The Player was a short-lived reality dating show that was set in the bling-bling world of mansions, cool cars and V.I.P parties that follows a stunning Miami model named Dawn Olivieri and her two girlfriends named Ananda & Jinelle for eight weeks as they pit thirteen self described "players" against each other in a quest to be the last one standing. Keep in mind that this show should not be confused with the short-lived 2015 NBC crime action drama series of the same name.

During each episode, the guys will receive a challenge from a anonymous "Player Operator" (usually voiced by a mysterious guest, ala Charlie's Angels) that test the "player's" skills. Their ability to carry out these tasks will determine which ones gets to go on glamourous dates with Dawn to the hot spots of South Beach Miami. The object of the competition for these "self-proclaimed" masters of the opposite sex is to win over Dawn, with the approval of her girlfriends (ala Cupid) However, the guys will be thrown in a variety of situations with the possibility of sudden death eliminations. Losers will get tossed from the game will the probably-soon-to-be-trademarked cliché, "Don't hate the player, hate the game!". 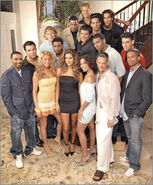