Game Shows Wiki
Register
Don't have an account?
Sign In
Advertisement
in: Board Game Conversion, Themed Quiz, Celebrity,
and 9 more

The Reel to Reel Picture Show

The Reel to Reel Picture Show (also known as Reel-to-Reel) was a short-lived game show based on a board game from outside the United States. This show was cancelled due to the fact that the production company bankrupted.

Two teams, consisting of one civilian and one celebrity, competed.

The civilian on the first team pushed a button, which randomly selected one of six categories and a point value (either 100, 250, or 500 depending on difficulty). Marshall would ask them a question in that category; getting it right won the points, while getting it wrong meant nothing happened. The second team repeated the process.

The round ended with each team getting three questions worth 300 points apiece, with the third question being a true/false question about the opposing team's celebrity. After this, the team in the lead got a small prize.

Six categories were given, and the trailing team selected one. They were then asked six questions in that category (increasing in value from 100 to 200, 400, 800, 1,000, and 2,000 points). The process was repeated with the second team. The team in the lead after this round won the game, received a bigger prize, and advanced to the bonus round.

The winning team was asked six questions. Each answer contained a clue to a famous person, movie character, or title. After the six questions were asked, they had ten seconds to solve the puzzle. A correct solve won a trip.

PAX ordered 200 episodes (40 weeks) of Reel-to-Reel, which would have taken the series through June 4, 1999. Despite the order, the production company – TIL – was having financial problems while tapings proceeded and ceased production after five weeks (25 episodes) had been filmed. No contestants, celebrity guests, or staff (including host Marshall and announcer Armstrong) received any payment or prizes from the producers.

Technically, the 1998 tv show on the formerly short-lived PAX network (later i, now ION Television) was based on a Canadian board game by Daisy Reel in 1995 rather than vice-versa (note the copyright). With the effort ending badly, the producers being unable to deliver prize winnings, nor even pay visiting celebrities or host Peter Marshall. Rumor has it that there was also a quiz book that came out but no information is out as of yet. Before the Bonus Round, Peter showed the game to the home audience that was shown below and gave a toll-free number (1-800-600-9676) to order it from. 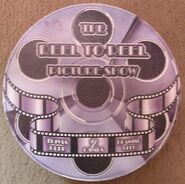