The Singing Bee was a short-lived musically-themed game show where contestants were tested on their musical capabilities by singing along to popular songs; in other words it was the show where "You don't have to sing it well - You just have to sing right" (which in turn it also uses the same tagline for its competitor Don't Forget the Lyrics!). In each episode, six contestants (four contestants in season two) were selected from the audience to play a series of games that tested their knowledge of song lyrics. If a contestant made a mistake, he or she would forfeit his/her chance to get into the "musical chairs". If a contestant was not in a musical chair when the round was over, he/she was eliminated.

The host would provide the year the song was released, the performer, and the name of the song. A portion of the song was performed, and then the contestant had to attempt to sing the next line of the song. If correct, they advanced to the next round, and a new song was introduced, which the next contestant in line had to attempt; if not, they had to step back, and the next person in line would try the same song. A song was thrown out if none of the remaining contestants got the lyrics correct. The first four people (three people in Season 2) who got a song lyric correct advanced to the second round, and any contestant who didn't have a chance lost and returned on a future episode.

This followed a similar format to the first round, but instead of singing a line, the contestant was required to sing the entire chorus without mistakes from the song performed. If both were correct or incorrect (sometimes after two rounds, meaning they each play twice), then they would go to a tiebreaker, where they were given the year and the name of the performer and the first person to buzz in was given the option of singing or passing. If the singer was correct, they won. If the singer was wrong, the other contestant won.

The winner advanced to the Final Countdown.

Ray Chew introduced this concluding round by announcing in song: "It's the Final Countdown!" Up to seven songs were performed in a similar manner to Round 1, but the contestant knew nothing about the song, (artist, title, year) and thus had to use the lyrics in order to win the big money. For each song lyric that was sung correctly, the player won $5,000. If he/she got five right, then they won $50,000. However, if he/she sang a lyric incorrectly, a strike was given. If three strikes were given at any point, the game was over, but the contestant still won whatever money was accumulated up to that point. Beginning in Season 2, the winning contestant also returned as a defending champion on the next show agains three new challengers. On the CMT version of the show, correctly guessing a song earned $500, and getting five won $10,000.

The above format was the standard for a 30-minute episode of the show. In a one-hour show, several changes were made:

A Board Game was released by Cardinal in 2007. 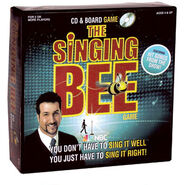 A DVD game was released by Imagination in 2007. 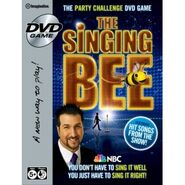 Here are a list of countries where The Singing Bee was aired and had other versions:

The Singing Office – Spinoff show aired on TLC in 2008